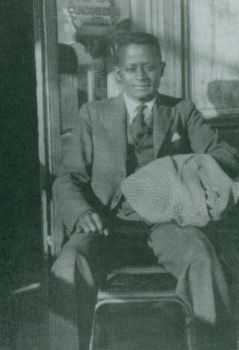 Eric Walrond was an Afro–Caribbean-American fiction writer and journalist of the Harlem Renaissance era.  Born December 18, 1898, in Georgetown, British Guyana, Walrond would write short stories with the interwoven themes of immigration, racial pride, and discrimination as he captured the early urban experience of Caribbean-born immigrants in America during the 1920s.  Although Walrond’s work has been largely overlooked, his book, Tropic Death (1926) is considered a major contribution to the cultural and literary style of the Harlem Renaissance.

Walrond lived in Guyana until 1905, when his mother, Ruth, moved the family to Barbados in 1906. Walrond began his formal education at St. Stephen’s Boys’ School near Bridgetown, Barbados.  The disruptive impact that European colonialism had on the lives of many Afro-Caribbean people can be seen early on in Walrond’s life, as his father deserted the family and went to Panama to find work on the building of the Canal.  After being forced to sell their property in Barbados, the Walrond family joined twenty thousand West Indians who went to Panama looking for work.  They moved into the U.S.-controlled Panama Canal Zone in 1911 to find jobs and their missing father and husband.  Ruth located Walrond’s father but they were unable to reconcile.  The family remained in the Canal Zone struggling to earn a living in the impoverished and racially segregated city of Colon, Panama.

Walrond, however, managed to complete his education (1913-1916).  Now fluent in Spanish, he was employed by the Health Department of the Canal Commission, the governing authority in the U.S. controlled Canal Zone.  Soon afterward, he began his writing career as a reporter (1916-1918) for the Panama Star and Herald.

In 1918 Walrond settled in New York City’s Harlem.  He completed writing courses at City College and attended Columbia University for one year while working as a porter and stenographer.  Harlem’s vibrant black community made a lasting impression on the young writer.  He noted and wrote about African American migrant-Caribbean immigrant antagonism, white racism, the politics of Marcus Garvey and W.E.B DuBois and the lives of other writers such as Claude McKay.  Walrond’s short stories, “City Love,” “Miss Kenny’s Marriage,” “On Being Black,” “The Godless City,” and “The Adventures of Kit Skyhead and Mistah Beaty” all reflected his impressions of his new home, Harlem.

In the early 1920s Walrond worked as an editor for the Brooklyn and Long Island Informer.  Walrond also contributed stories to Smart Set and Vanity Fair as well as Marcus Garvey’s The Negro World, and the Urban League‘s Opportunity along with many other magazines and newspapers.   Walrond’s writing earned him a number of awards including the Harmon Award in Literature, a Zona Gale Scholarship at the University of Wisconsin, and a Guggenheim Fellowship for fiction in 1928-1929.

In 1927, after spending nearly ten years in New York, Walrond left for London, UK to continue his writing.  Walrond could not duplicate his earlier success and much of his work went unnoticed in the British capital.  For much of his time there he worked as an accountant.  Eric Walrond died in London on August 8, 1966 following a heart attack.