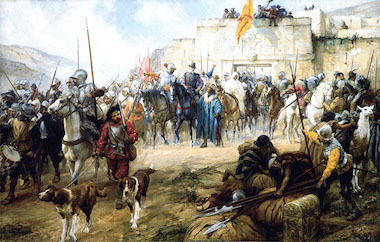 Juan Valiente, a Spanish-speaking black conquistador, was born in Northwest Africa around 1505 and was enslaved and acquired by the Portuguese.  He was eventually purchased by Alonso Valiente, who had become a wealthy resident of Mexico City and Puebla after his participation in the conquest of Mexico in 1521.  Alonso Valiente acquired Juan, baptized him as a Christian under the name Juan Valiente, and took him to Spain as a servant.

Eventually, Juan Valiente returned to Puebla, Mexico with his owner and in 1533 signed a contract with Alonso Valiente that allowed him to participate as a conquistador in other areas of the New World in exchange for profits from the expeditions that would be shared with his owner and used to purchase his freedom.

With this agreement Juan Valiente traveled to Guatemala in 1533 as a soldier and then joined Pedro de Almagro’s expedition to Peru in 1534. Valiente was one of an estimated 200 people of African ancestry participating in that expedition.  Most expedition members died from starvation or exposure to the elements in the Andes Mountains. Valiente, however, survived.

In 1535 Valiente joined Spanish explorer Diego de Almagro’s expedition to Chile. By 1540 he was a member of the Juan de Valdivia expedition to Chile where he was promoted to captain of the infantry. In 1546 he helped found Santiago de Chile. As compensation he received an estate near the city.  Sometime around 1548 Valiente married Juana de Valdivia, a former slave of Governor Juan de Valdivia. In 1550 Governor de Valdivia granted Valiente an encomienda near Conception where Indian laborers worked his lands.

Although he lived as a free man with a small fortune made in Chile, technically Juan Valiente was still enslaved to Alonso Valiente. Although he attempted to send payments to Spain, they apparently were not received and the senior Valiente continued to demand them. Juan Valiente died fighting Andean Indians at the Battle of Tucapel in 1553, unable to ever legally claim his freedom.  Nonetheless, his son inherited his encomienda.

While Juan Valiente was the most famous of the black conquistadors in Chile, he was in fact one of a number of sixteenth century armed African-born or Spanish-born free blacks and slaves who beginning with Juan Garrido with Cortez in Mexico in 1521, participated in the Spanish conquest of Mexico, Costa Rica, Guatemala, Honduras, Panama, Venezuela, Peru, and Chile.  Most enslaved men gained their freedom for participating in these expeditions while others who were free were awarded minor posts in their new homelands. Ironically Valiente, one of the few black conquistadors to gain land as compensation for his conquests, never gained legal freedom.