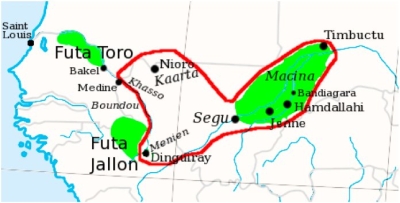 The Tukulor Empire was a Muslim theocracy established during the mid-19th century major jihads (holy wars) in Western Africa. At its apogee, the empire extended from Senegal eastward to Timbuktu, a distance of 1,500 miles. The empire’s founder, Al Hajj Umar, a Senegalese Islamic scholar and leader, had gained notoriety by popularizing the Islamic Sufi order, the Tijaniyah.  The members of that order helped him gain the loyalty of thousands across the Western Sudan.

Al Hajj Umar began a jihad in 1852 with the attack on the city of Tamba in Senegal.  Its conquest marked the first victory of a systematic military expansion and the creation of an Islamic state.  In 1852 Umar established the capital of Tukulor in Dinguiraye, in what is now northern Guinea. From that capital he and his followers conquered the region of Bambuk.   By 1855 he turned his followers west toward Futa Toro which was near the 300 year old French colony at Saint-Louis.   French Governor Louis Faidherbe received troops and supplies to defend Saint-Louis and its other French West African Colonies.  In 1856, the governor built a fort at Medine to check the Tukulor expansion.  When Umar and his followers launched an attack on Medine in April 1857, they overran the military outpost but the French reconquered it in July 1857.  This reconquest was the first defeat of Tukulor forces since the jihad began five years earlier.

Following this defeat, the Tukulor Empire literally relocated itself 300 miles eastward away from areas of French control.   The French, by that point, however, began a campaign to expand their own empire in West Africa and in 1859 attacked the Tukulor Army at Gemu.  The Tukulor were again defeated and again retreated eastward.  To protect the rest of his empire, Umar in 1860 negotiated a agreement with the French which relinquished all of his Senegalese conquests.  The Tukulor Empire, however, continued to expand eastward and the capital was relocated in Segu (in modern Mali).

In 1862, Al Hajj Umar attacked the Muslim caliphate of Hamdalahi in Massina. Despite the victory, Umar was subject to severe criticism from Muslims for the first time as opponents accused him of transforming the jihad into a war of conquest. Several insurrections broke out in other parts of Tukulor while Hamdalahi was under siege in 1863. Umar managed to escape a rebellion by his own troops but was then caught and killed in 1864.

After Al Hajj Umar’s death, the Tukulor Empire quickly disintegrated due to rivalry between Umar’s sons and continuing internal revolts.  Successive rulers attempted to claim the mantle of authority established by Umar but none of them could replicate the Empire’s short-lived glory.   By 1880 the French, using mostly African troops recruited often from the territory of Umar’s rivals, had conquered all of the land between Senegal and the Niger River that once was part of the Tukulor Empire.