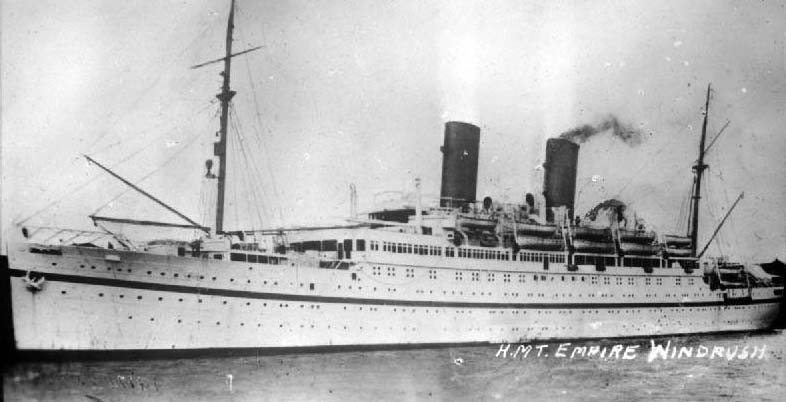 Although persons of African ancestry had resided in Great Britain since the time of the Roman conquest, their numbers and influence increased dramatically in the years immediately after World War II. On June 22, 1948 the HMT Empire Windrush, carrying over a thousand passengers, docked in Tilbury Harbour, Essex, England. The disembarking of 492 African-Caribbean migrants would transform post-colonial Britain. Under the auspices of the British Nationality Act of 1948, Commonwealth citizens were granted British citizenship, entry, and rights to settle into Britain. The majority of the Empire Windrush passengers were men from Jamaica. Ex-Royal Air Foremen (RAF) who fought in World War II was also on board the ship. Entire families from Trinidad, Barbados and other Caribbean islanders of various class and professional backgrounds also took the opportunity to immigrate to Britain for economic opportunities. Caribbeans were also recruited to work in the Lyons Tea Houses, British Rails, and the National Health Service sectors. Caribbeans, who could not afford the £28.10 passage fare, risked their lives as stowaways to get to Britain. Averill Wauchope, a Jamaican seamstress, would emerge as one of the Windrush Generation’s most distinguished stowaways.

Ships such as the Georgic, Orbita, and Pacifico del Reino in the late 1940s and early 1950s also transported Caribbeans to Britain. On the Empire Windrush, Trinidadian Calypso musician Lord Kitchener, who would go on to have an illustrious career in music, penned and sang ‘London is the Place for me,’ capturing the dream and hope Caribbean migrants had of Britain. Caribbeans who made the voyage were reunited with friends and families upon their arrival. Settlers, particularly single men with no lodgings, were housed at the Clapham South deep level shelter that once held German POWs.

Settling in post-war Britain, Caribbeans seeking housing encountered racism. Signs such, ‘No Blacks, No Irish, No Dogs,’ ‘Keep Britain White’ and ‘Blacks go back home’ reflected racial hostility and suggested that the black presence was not welcomed in post-war Britain. That racial friction culminated in the 1958 Nottingham and Notting Hill riots. Many anti-immigrant campaigners utilized those riots to refuel anti-immigrant campaigns to persuade Parliament further to sanction laws to control the entry of Commonwealth citizens into Britain.

Although Cypriot, Greek, Irish, and Jewish settlers and refugees outnumbered blacks and South Asians, it was their presence that captured the attention of anti-immigrant campaigners. Before the enactment of the 1962 Immigration Act, 130,000 Caribbeans entered Britain in 1961 to ‘Beat the Ban.’ The mandate and its work vouchers scheme drastically reduced the number of blacks and South Asians given entry into Britain after its enactment. Between the 1960s and 1980s, the British government enacted a succession of de jure immigration acts that redefined belonging in post-colonial Britain regardless of jus soli during that timeframe.

The 2011 British Census indicates that an estimated two million black British people resided in the United Kingdom, with the vast majority descended from the post-World War II immigrants. The Windrush Generation and their children’s social, political, economic, and cultural contributions continue to shape and transform modern Britain and British-Caribbean global communities. Sam Beaver King, a Jamaican RAF, Windrush passenger and immigrants’ rights advocate, for example, would go on to become the first black Mayor of Southwark, London in 1983. In 1998, an area in Brixton, London was renamed Windrush Square to commemorate the 50th anniversary of the ship that brought Caribbeans to Britain. Despite recent attempts by the Home Office to further limit the black presence in post-colonial Britain, they are in Britain to stay.