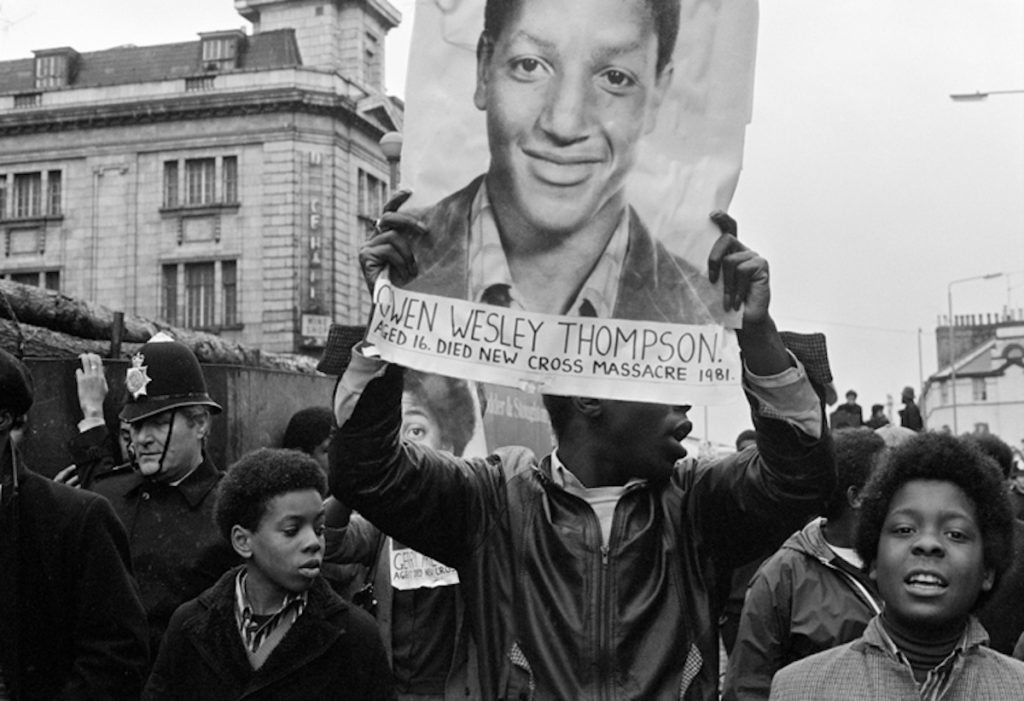 On the night of the fire, nine black youth died. By February 9, four more black teenagers had succumbed to their fire injuries. Before the New Cross Fire, black homes and community centers were targeted and burnt down. Many black Britons believed that the National Front (NF), a fascist group, was responsible for those incidents as well as the New Cross Fire tragedy.

Corroborated eyewitness accounts placed a ‘white man’ in an Austin Princess vehicle at the New Cross Fire scene. Witnesses stated that he threw a Molotov cocktail into the house party. Others believed, however, that the fire started from a dispute between revelers.

After several subsequent failed inquests by The Metropolitan Police, (the Met) black Britons were convinced that the police had failed the black community by not treating the thirteen black youths’ deaths seriously. Frustrated by the police’s inquests, on January 20, black Britons began organizing. ‘An assembly of the people’ consisting of five hundred black Britons was formed to investigate the killings. A week after the fire, 2,000 mourners gathered at the Moonshot Youth Centre in South London to pay their respects and to ‘devout themselves to the struggle for justice.’

It was through the ‘assembly of the people’ that black-Britons discovered that the police was ‘forcing statements’ out of black youths without lawyers or parents being present. Subsequently, the New Cross Massacre Action Group was formed and led by activists, writers, and civil rights campaigners John La Rose and Darcus Howe. They declared March 2, the ‘Black People’s Day of Action’ to demonstrate against the Met’s mishandling of the teenagers’ deaths. On 1 March, the Daily Mail falsely reported that several of the fire survivors were arrested and would face severe charges in what black Britons saw as an attempt to undermine the demonstration and the black community’s inquest into the house fire.

On March 2, an estimated 20,000 demonstrators including members of the Black Panther Party, Black Parents Movement, and Black Youth Movement, marched in one of the most massive demonstrations against racial injustice in British history. For ten hours campaigners marched eight miles from Fordham Park, South London to Hyde Park, Central London with placards stating, ‘Thirteen Dead, Nothing Said’ and ‘No Police Cover-Up.’

Weeks after the demonstration, ‘Swamp 81’, a plainclothes police operation, was launched in Brixton, South London, the heart of the black Briton community. In early April, an estimated 943 peoples were stopped and searched by the police under ‘Sus laws’, an addendum to the 1824 Vagrancy Act, and 188 black youths were arrested. Many black Britons viewed those acts the state’s retaliation for the ‘Black People’s Day of Action’ demonstration. From April to the end of the summer of 1981, several significant uprisings occurred in various British cities.

The New Cross Fire was a significant turning point in Britain in terms of black Britons, the police and the media’s relationship and intergenerational alliance to expose racism, injustices and the plight of black Britons. Today, the New Cross Fire remains unsolved. But, as Darcus Howe said on the 30th anniversary of the fire in 2011 it is ‘the blaze we cannot forget.’