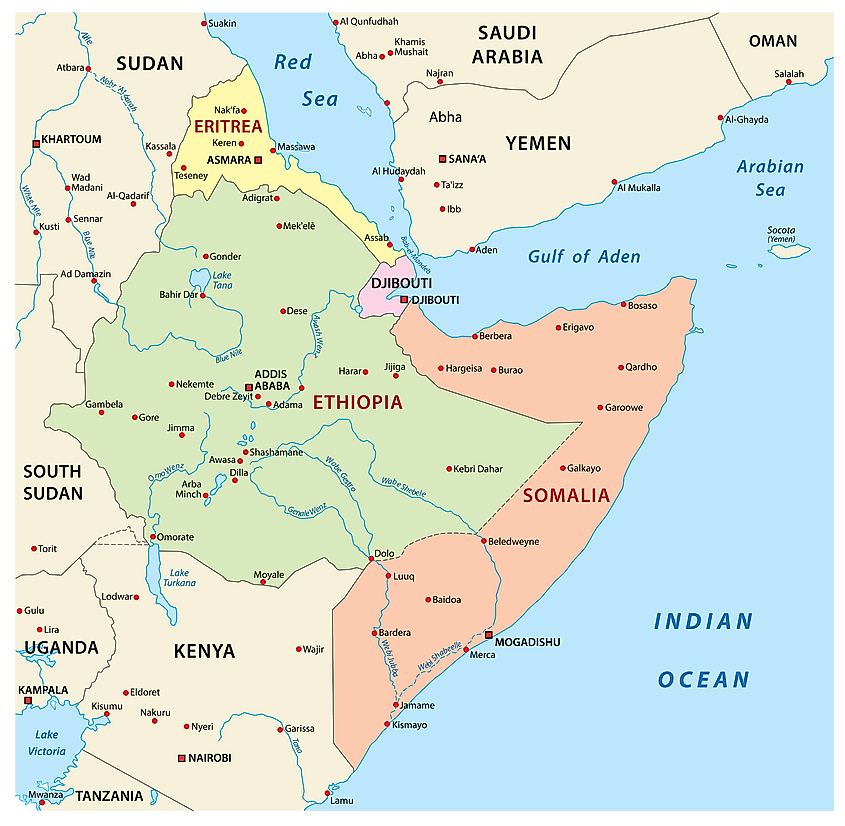 The Horn of Africa (HoA) is the African continent’s easternmost peninsula. The English name for the region derives from the horn-shaped land formation of the easternmost point of the African continent. The peninsula stretches hundreds of kilometers into the Gulf of Aden, Somali Sea, and Guardafui Channel near the Red Sea’s southern limit. HoA includes Djibouti, Eritrea, Ethiopia, and Somalia as internationally recognized countries and the unrecognized country of Somaliland. The peninsula has an estimated population of 115 million and an estimated 130 languages. The four main languages being Oromo, Amhara, Somali, and Tigray. The Horn of Africa is believed to be the birthplace of humanity. The oldest known australopithecine remains, dating back to 3.2 million years ago, were found in the Afar Triangle in Ethiopia in 1974.

The Kingdom of Aksum (also known as the Aksumite Empire) was an ancient empire that flourished between the 1st and 7th century A.D. in the Eritrean and Ethiopian highlands. Around 500 C.E., The Horn of Africa became a major hub for trade due to Aksum’s strategic location allowing it to take advantage of trade routes leading into Africa’s interior. Ivory, highly desired worldwide for its aesthetic value and rarity, was a key commodity traded along these routes.

Aksum’s rulers promoted trade by minting their own money, making it a prominent player in trade between the Roman Empire and Ancient India. With the defeat of the Himyarite Kingdom in 525 CE, the state cemented its control over the waning Kingdom of Kush. It routinely intervened in the affairs of the Arabian peninsula’s kingdoms, eventually expanding its rule over the region. The kingdom of Aksum became the first major empire to adopt Christianity.

Somalia was a vital connection in the Horn of Africa’s trade network, connecting the region to the rest of the ancient world. Frankincense, myrrh, and spices were all prized luxuries to the Ancient Egyptians, Phoenicians, Mycenaeans, Babylonians, and Romans, and Somali sailors and merchants were the principal suppliers. As a result, the territory became known as Regio Aromatica among the Romans. Several wealthy Somali city-states, such as Opone, and Mosylon, competed with the Sabaeans, Parthians, and Axumites for the lucrative Indo-Greco-Roman trade throughout the classical era.

By the end of the 19th century, The Horn of Africa, excluding Ethiopia, was colonized by the French, British, and Italians. In 1885, Djibouti was declared French Somaliland; British Somaliland controlled the Gulf of Aden region, and Italian Somaliland controlled the territory closest to the Indian Ocean and Eritrea’s Red Sea province. Somalia gained independence on July 1, 1960, and Djibouti gained independence from France on June 27, 1977.  The Italians colonized Eritrea until 1951. The U.N. General Assembly voted for a federation between Eritrea and Ethiopia in 1951. Ethiopian Emperor Haile Selassie abolished the federation and annexed Eritrea in 1962, igniting a 30-year armed conflict in Eritrea. The countries eventually split on April 27, 1993, creating a newly Independent State of Eritrea.

A major famine hit Ethiopia from 1983 to 1985.  The country’s worst famine in a century, with 1.2 million losing their lives, 400,000 refugees fleeing the country, and 2.5 million Ethiopians becoming internally displaced. Somalia erupted into a civil war in 1991, steering the country into anarchy and famine. Due to the peninsula’s strategic location, the instability has caused great concern for the international world. Since 2007, the African Union has been operating a peace mission in Somalia in hopes of creating relative peace in the country and the peninsula.