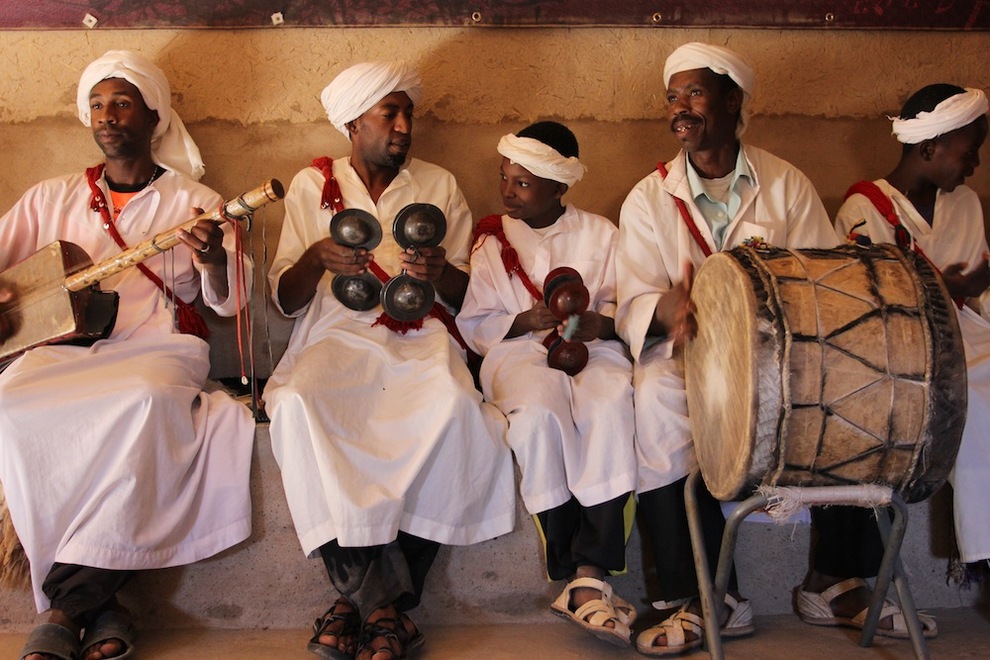 Hear a soundtrack specially chosen to enhance your learning about The Gnawa (Islamic Sect) (11th c.- )

The Gnawa (sing. Gnawi) are an ethnic group and Islamic sect of West African-descent centered in Morocco who have become globally known for their use of music in liturgy. Beginning in the 11th century under Yusuf Ibn Ta, the Sultan of Morocco under the Ottoman empire, began conscripting Black Africans into military service. In the 17th century, Moroccan Sultan Mawlay Isma’il issued orders to not only capture Black Africans for conscription into his army, but to also to force them to perform agricultural and domestic occupations. Mainly captured from the Soninke, Bambara, Fulani and Hausa empires, which were already exposed to Islam through trading, the Gnawa settled into their own communities in Morocco in which they fused their indigenous, often animist practices with their Islamic identity. Though this is the most agreed upon historical record, some Gnawa have insisted that they are instead descendants of Bilāl ibn Rabāḥ, born in Mecca in the late 6th century but of Ethiopian descent, formerly enslaved, aid to the Prophet Muhammad, and the first Muezzin to call the faithful to prayer.

In Gnawa theology, there are seven colors, each which are representative and ruled by a pantheon of Mluk (sing. Mlek), or spirits, that are often modeled after traditional African deities and Biblical and Qur’anic prophets. As in traditional African religions, the Gnawa do not believe that Allah, the ultimate power, can be reached directly, but must be sought through these ancestral Mluk. They also believe that one or multiple Mluk can inhabit a Gnawi, and that the Mlek can never be fully exercised out, but must be routinely appeased through Lila, a complex liturgy. In the Lila, Gnawa musicians play songs associated with the Mlek that inhabits the Gnawi. Traditionally all male, the Mâllem or master, leads on the hajhuj, a type of 3-stringed guitar, and up to seven other male Gnawa play the qraqrebs, a cymbal-type percussion instrument. The inhabited Gnawi, dressed in the color of the Mlek, will be guided into a trance by the music, supported by a mqaddema, typically a woman who has already mastered appeasing her Mlek. Amid giving offerings, it is not uncommon for the inhabited Gnawi to perform movements associated with the Mlek. For example, some Gnawa inhabited by Sidi Musa, represented by blue and stemming from the Biblical prophet Moses, have been recorded laying on the floor making swimming motions with their arms while in trance.

Beginning in the 1970’s, Mâllems and Gnawa musicians like Mahmoud Guinia and Hassan Hakmoun began making Gnawa music of global interest and sound. It attracted the attention of and collaboration with jazz giants such as Randy Weston, Pharoah Sanders, Omar Sosa and Don Cherry, and even reggae artists like The Wailers. In 1998, Morocco hosted its first annual Gnaoua World Music Festival in Essaouira, a port city on Morocco’s Atlantic coast which continues to attract large global audiences today, while street Gnawa performers in Marrakech, east of Essaouira, have become a recent staple in Moroccan tourism. In 2019, UNESCO Inscribed the Gnawa into the Representative List of the Intangible Cultural Heritage of Humanity.