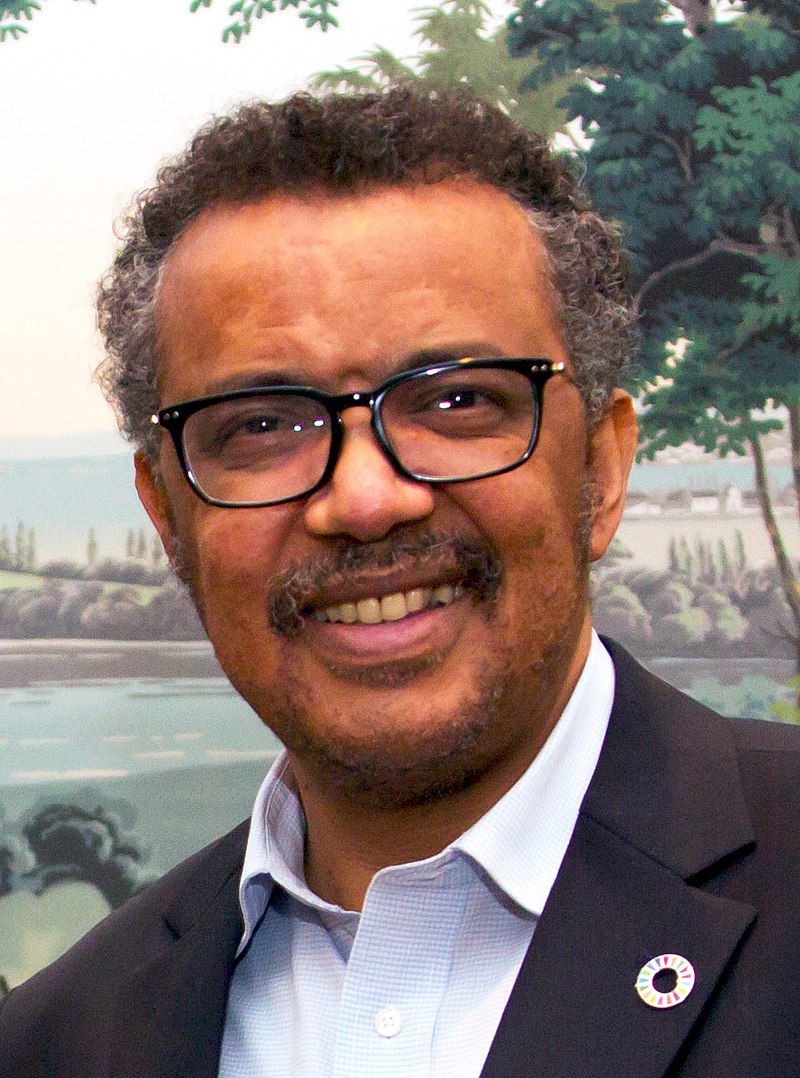 Dr. Tedros Adhanom Ghebreyesus is the current Director General of the World Health Organization (WHO) and the first non-physician to hold the position. Ghebreyesus was born in 1965 in Asmara, Eritrea, East Africa, to Adhanom Ghebreyesus and Melashu Weldegabir. He attended the University of Asmara and after receiving a BS in Biology in 1986, he joined the Ministry of Health of the Derg (Communist government then ruling Ethiopia) as a Junior Health Expert. While there he was credited with improving access to health services including training 40,000 women health extension workers and reducing infant mortality by 29%. After the fall of the Derg in 1991, Tedros Adhanom moved to London for graduate school.

Tedros Adhanom acquired a Master’s of Science in Immunology of Infectious Diseases from the London School of Hygiene & Tropical Medicine at the University of London in 1992. He later attended the University of Nottingham receiving a Ph.D. in Community Health in 2000. His thesis focused on research investigating the effects of dams on the transmission of malaria in Ethiopia including specifically the Tigray regions.

In 2001 Dr. Tedros was appointed head of the Tigray Regional Health Bureau. He served as a State Minister of Health from 2003 to 2004, and was appointed Minister of Health for all of Ethiopia in October 2005. He then served as the Chair of the Roll Back Malaria Partnership Board and Co-Chair of the Partnership for Maternal, Newborn and Child Health Board, before being elected as the Chair of the Global Fund to Fight AIDS, Tuberculosis, and Malaria Board in 2009.

Dr. Tedros was Ethiopia’s Minister of Foreign Affairs from 2012 to 2016, as well as Chair of the Executive Council in 2014. He was instrumental in the 2015 Third International Conference on Financing for Development, held in Addis Ababa, Ethiopia. He is credited with saving the conference from collapse by drawing 193 countries to the table to work together to finance the initiative for the Sustainable Development Goals program. He was also an important political and health care leader in the African Union’s response to the 2013-2016 West Africa Ebola epidemic.

When Dr. Tedros announced his candidacy for the five-year term of Director-General of the World Health Organization (WHO) in May 2016, he was the only African candidate. On May 23, 2017, Dr Tedros was elected by an overwhelming 133 out of 185 votes, and became the first African to lead the WHO, the first to lead the organization who was not a medical doctor, and the first elected to a vote open to all Member States of the World Health Organization. He has published dozens of articles in scientific journals and received numerous awards across the globe, including the Jimmy and Rosalynn Carter Humanitarian Award in 2011.

Dr. Tedros’s listed his top priorities at the WHO immediately after taking office on July 1, 2017 as promoting universal health coverage, focusing on the health of Women and Children, assessing the impact of climate and environmental change on global health. Since early 2020, however Dr. Tedros has led the WHO in the world management of the Coronavirus (COVID-19) pandemic.

Dr. Tedros lives in New York City and Geneva, Switzerland. He is married and has five children.