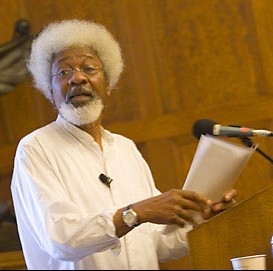 Akinwande Ouwole “Wole” Soyinka, the first African writer to win a Nobel Prize in Literature (1986) was born in Abeokuta, Nigeria on July 13, 1934.  His father, Canon S.A. Soyinka, was an Anglican minister and his mother, Grace Eniola, was the daughter of an Anglican minister.

Soyinka wrote his first major plays, The Swamp Dwellers and The Lion and the Jewel, while working at the Royal Court Theater in London.  His next plays, The Trials of Brother Jero and A Dance of the Forest appeared after he returned to Nigeria in 1960.  A Dance of the Forest, a biting criticism of Nigeria’s elites, was first performed on October 1, 1960, Nigeria’s Independence Day. In 1963, Soyinka’s first feature length film, Culture in Transition, was released. One year later, The Interpreters, his most famous novel, was published in London.  Both pursued a similar theme.

By 1965, Soyinka’s reputation as a leading dramatist and a political critic of the government was well established.  That year Soyinka was arrested for his criticism of recent elections but was released after protests from the international community.  In 1967, he secretly and unofficially met with Ibo leaders in a vain attempt to prevent the Nigerian Civil War.  When the war began Soyinka was declared a traitor and was incarcerated for the remainder of the war.

After his release, Soyinka lectured and lived in Europe.  By 1975, he had returned to Africa and lived briefly in Accra, Ghana, where he edited a literary magazine called Transition.  He used the magazine to critique African dictators such as Idi Amin in Uganda.  He returned to Nigeria later that year after his political nemesis, General Yakubu Gowon, was removed from power.  For the next decade he continued his writing and political protests prompting more government repression.  His 1984 play, The Man Died, was banned by a Nigerian court.  In 1986, however, Soyinka won the Nobel Prize in Literature.

In November 1994 Soyinka fled Nigeria and briefly lived in exile in the United States.  In 1996, while in the U.S., he wrote The Open Sore of a Continent: A Personal Narrative of the Nigerian Crisis.  The following year, he was charged with treason by the Nigerian military government.  Soyinka returned to Nigeria when civilian rule was restored in 1999.  However, his critique of the government continues.  In April 2007, he called for the cancellation of Nigerian elections due to widespread violence and fraud.