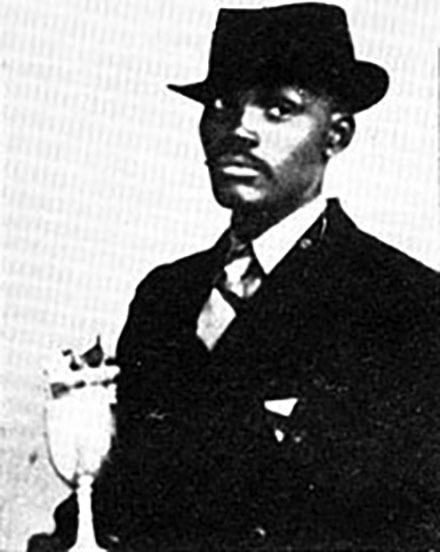 Composer, lyricist, choreographer and Countertenor Solomon Popoli Linda, a Zulu, was born in 1909 in Pomeroy, KwaZulu-Natal, South Africa. While he was musically oriented, Linda was also was inspired to perform after hearing a recording of the Hampton Institute graduate, Orpheus McAdoo, who was then director of the Virginia Concert Company and Jubilee Singers. The Singers performed at Gordon Memorial School in the South African village of Msinga in 1898.

In 1920, Linda, who could barely read English, composed and wrote the song “Mbube,” which means lion in Zulu. While performing with a choir, The Evening Birds, he earned a living as a migrant worker. In 1930, Linda left KwaZulu-Natal for Johannesburg, where he led an Acapella ensemble and performed in local beer halls. In addition, arranged compositions in four-part harmony. He would include a descant to counter the melody, which is not unusual in Zulu music and very engaging. Linda used this style of “call and response” singing as a foundational practice for much of his work.

In 1938, Linda introduced Mbube to a new group, the Original Evening Birds, teaching them harmony and techniques of improvisational skills. Discovered by a talent scout, they recorded several songs in Eric Gallo’s Johannesburg recording studio. During their second session, “Mbube” was recorded in four takes. Copies were shipped to England as 10″ 78 rpm discs and became a word-of-mouth hit; the song was officially released in 1939 and quickly became a hit in Southern African cities, selling more than 100,000 copies.

“Mbube” drew the interest not only of indigenous Africans but also white missionaries, tourists, and ethnomusicologists whose replaying of it made the song an internationally recognized classic. In 1948 Linda sold the worldwide rights to “Mbube” to a South African record label for $2. The song was renamed “Wimoweh” and recorded by numerous individual singers and groups, including Pete Seeger and The Weavers in 1948. Linda’s words, “Uyimbube, Uyimbube,” were changed to “Wimoweh,” in the recording the Weavers produced. The record was a modest success selling fewer than 20,000 units. They sent Linda a check for $1,000.

In 1961, Composer and pianist George David Weiss rearranged “Wimoweh,” adding the piano, soprano, alto, tenor, and bass and introducing all-English lyrics. Weiss called his version, “The Lion Sleeps Tonight.” Sung by the Tokens, it topped the 1961 Billboard pop chart and earned more than $15 million in royalties from sales and film licensing.  In 1972, Robert John released his version of the song which peaked at no. 3 on the Billboard Hit 100 Chart and sold more than one million copies.

In 1959, while performing on stage with The Evening Birds, Linda collapsed and was later diagnosed with kidney disease. Three years later, Solomon Popoli Linda died a pauper with $25 in his bank account on October 8,1962 in Soweto, South Africa. He was 53 and left behind a wife, Regina Linda, and four children.

In 2004, the descendants of Solomon Popoli Linda filled a lawsuit against the Walt Disney company, seeking $1.6 million in royalties for its use of his song “Mbube” in the production of “The Lion King.” The settlement involved an unknown payment of back royalties to the family and the right to participate in the royalties globally and in the future.