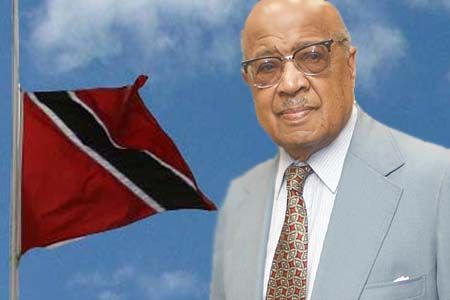 Ellis Immanuel Innocent Clarke was born on December 28, 1917, in Belmont. He attended St. Mary’s University where he was awarded an Island Scholarship in Mathematics. He continued his higher education at the University of London and was admitted to the bar in London in 1941.

Clarke served as Solicitor-General from 1954 to 1956, as Deputy Colonial Minister in 1956-1957 and as Attorney-General in 1957-1962. After independence in 1962, he served as Ambassador to the United States, Canada, and Mexico, and as Permanent Representative to the United Nations. After gaining independence, Ellis Clarke became a foreign diplomat and held numerous posts, sometimes simultaneously, between 1962 and 1976, including that of Permanent Representative of Trinidad and Tobago to the United Nations.

During his time as Governor General from 1972, he was involved in drafting the republican constitution that severed ties with the British monarchy in 1976 while retaining membership of the Commonwealth. As the first president of the Caribbean Republic to be appointed by an electoral university under this new constitution, he led Trinidad & Tobago from 1976 to 1987.

When Eric Williams, Prime Minister, and founder of the People’s National Movement (PNM), died in office in 1981, Clarke appointed his successor, George Chambers. About 40% of the country’s population of 1.3 million people are Afro-Trinidadians, 40% Indo-Trinidadians and 20% of mixed, white, or Chinese descent. Clarke identified with the Afro-Trinidadian population. When the Indo-Trinidadian opposition National Alliance for Reconstruction (NAR) Party came to power in 1986, there were problems, most notably a disagreement between the President and A.N.R. Robinson, the new Prime Minister over appointment powers. While Clarke won a legal challenge on one of these issues, a second dispute prevented him from seeking re-election for a third term.

Clarke’s tenure coincided with a period of relative prosperity and social stability. Trinidad and Tobago’s oil-based economy flourished between 1972 and 1983, but in 1986 the International Monetary Fund provided loans to the nation in return for it imposing an austerity program that resulted in 10% unemployment. On February 5, 1985, Clarke, a devout Catholic, hosted a visit by Pope John Paul II, the first by the leader of the Catholic church to the islands. Clarke remained active in national life, most notably as an adviser on additional constitutional reform. In 1993, he addressed the Republican Consultative Committee of Australia on the practicalities of a republic.

Clarke was made a Companion of St. Michael and St. George in 1960 and a Knight Bachelor in 1963. He was one of the first to be awarded the country’s highest honour: the Cross of the Holy Trinity in 1969. He is also the recipient of El Gran Cordon, Venezuela’s highest national award. The University of the West Indies has awarded him an honorary doctorate in law.

On November 24, 2010, Sir Ellis Clarke suffered a severe stroke and subsequently died on December 30, 2010, two days after his 93rd birthday. Clarke married the former Ermyntrude Hagley, a Grenadian accountant whom he had met in 1949 while visiting Trinidad, in 1952. They have two children, Peter and Margaret Ann.