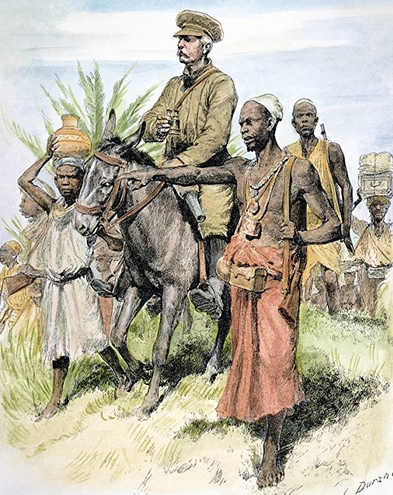 Sidi Mubarak Bombay, one of the most extensive travelers in sub-Saharan Africa in the 19th century, was honored for his assistance to British explorers and adventurers. Bombay, of waYao/Bantu ethnicity, was born in the Ruvuma Region of southern Tanzania around 1820. Separated from his parents at age 12 and taken into slavery by Arab slavers, he was eventually transported to Gugurat, India. After spending two decades enslaved in India, the death of his owner freed Bombay and allowed him to return to his African homeland.

Bombay enlisted in the army of Sultan of Zanzibar where he met British explorer John Hanning Speke who hired him as a guide for the initial expedition headed by Sir Richard Francis Burton, to locate the source of the Nile River. Bombay was with Speke in 1858, serving as one of his two his caravan captains, when Speke became the first European to reach Lake Victoria in Uganda. Initially, Speke and Bombay communicated only in Hindu but Bombay eventually added English, Arabic, and Kiswahili to the languages he spoke. Bombay reconnected with Speke in 1860 when he and Scottish explorer James Augustus Grant discovered that Lake Victoria eventually connected with the Nile River.

Bombay was given the name Mubarak by the explorers who hired him but he continued to call himself Bombay, the name he had adopted while in India. He gained a reputation for diplomatically dealing with tribal chiefs, managing caravan logistics, and African laborers.

Bombay’s service with the journalist-explorer Henry Morton Stanley who tracked down missionary David Livingstone in November 1871, was fraught with challenges unrelated to exploration. Like Speke, Stanley needed Bombay to help find the source of the Nile River later determined to be tributaries that flow into Lake Victoria and to locate the “missing” David Livingston. Despite his obvious value to Stanley, the journalist-explorer admitted in his memoirs that he insulted and beat short, thin Bombay especially when he suspected the often outspoken African of insubordination.

In 1875 Verney Lovett Cameron hired Bombay as a guide when he became the first European to cross equatorial Africa from coast to coast, from Zanzibar to Angola. This was the last major expedition into the African interior for Bombay.

It has been estimated that as an explorer Bombay tallied more than 9,600 land miles through the interior of Africa and possibly sailed a greater number of nautical miles in the Indian Ocean, the Red Sea, and waters along coastal Africa. His exceptional competence and vital role in these high-profile expeditions earned him a Silver Medal by Great Britain’s Royal Geographic Society in 1876 for his contributions to the British exploration of Africa and in particular the search for the source of the Nile. The Society also granted him a lifetime pension. In his final years Bombay worked for the Church Missionary Society helping missionaries spread the gospel across the African continent. Sidi Mubarak Bombay died in Tanzania on August 12, 1885 around the age of 65.