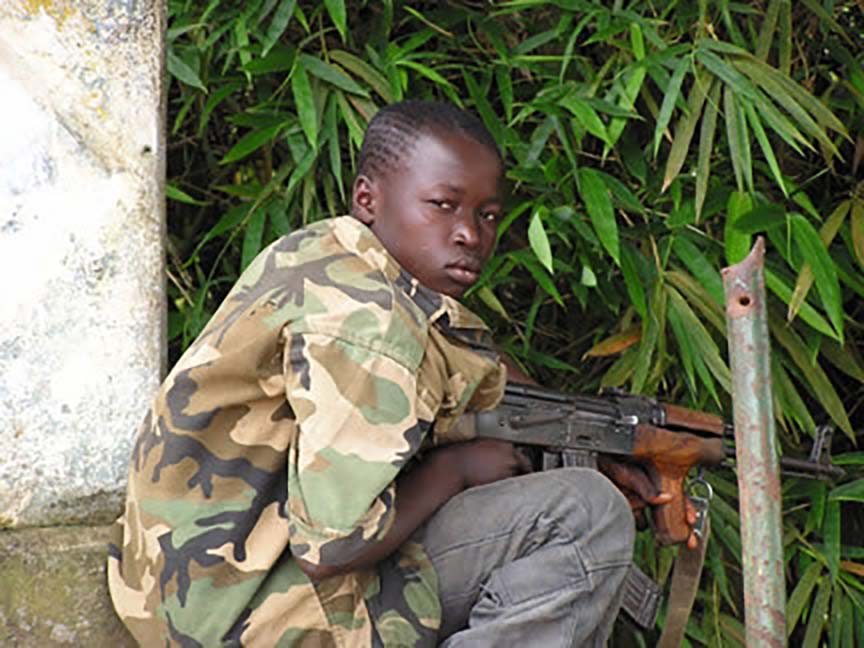 LURD child fighter, Po River
Public domain image
The Second Liberian Civil War was an intense four-year conflict that involved child soldiers on all sides and extensive civilian casualties. It was also one of the few civil wars that spread into neighboring countries, in this case, Guineaand Sierra Leone. The conflict began in April 1999 when a rebel group, Liberians United for Reconciliation and Democracy (LURD), with the support of the government of neighboring Guinea, began a military offensive to topple the government of President Charles Taylor. They quickly gained control over much of Northern Liberia.

The origin of the second civil war was rooted in the previous conflict waged between 1989 and 1996 which saw former rebel leader Charles Taylor become president of the entire nation, following UN-monitored elections in 1997. The country remained at peace only two years before LURD began its military campaign. Most of LURD were Mandingo and Krahn fighters led by Sekou Conneh. Many of them had been part of the rebel group, United Liberation Movement of Liberia for Democracy (ULIMO), which had fought in the first Liberian civil war against Taylor’s National Patriotic Front of Liberia (NPFL) as well as the government of President Samuel Doe.

In September 2000, to weaken support for the rebels from the government of Guinea and Sierra Leone which was now also supporting LURD, Taylor persuaded anti-government dissidents in both nations to form the Revolutionary United Front (RUF). They along with some of his paramilitary supporters began insurgencies and thus expanded the conflict to three nations. His action drew condemnation and opposition from the UN as well as support for Guinea and Sierra Leone from Great Britain and the United States.

By early 2002, LURD troops had outmaneuvered Taylor’s forces and were only about twenty-seven miles from Monrovia, the capital. Under leaders Conneh and Thomas Nimely, LURD troops mounted successful raids that bypassed government strongholds, and in May, they staged a bold attack on Arthington, less than twelve miles from Monrovia.

By early 2003, a second rebel group called the Movement for Democracy in Liberia (MODEL), backed by the government of Côte d’Ivoire, emerged in the south to challenge the Taylor government as well. By May 2003, Taylor controlled only about one-third of Liberia. With rebels closing in on Monrovia from all sides, President John Kufuor of Ghana, then chair of the Economic Community of West African States (ECOWAS), convened a peace conference in Accra to work out a negotiated agreement that would avoid further bloodshed in a four-year conflict that had already taken nearly three hundred thousand lives. When Taylor appeared initially reluctant to support the peace process, Leymah Gbowee formed an organization called “Women of Liberia Mass Action in Peace” which, after a silent protest outside the presidential palace, extracted a promise from the Liberian head of state to attend the peace conference in Accra.

By July, even as peace talks were taking place in Accra, LURD forces reached the outskirts of Monrovia and began a siege of the capital. In the subsequent shelling of the city, over one thousand civilians were killed and thousands more were made homeless. On July 29, LURD declared a ceasefire which allowed ECOWAS to send to battalions of mostly Nigerian troops to the capital as peacekeepers.  As it became increasingly apparent that his government would not survive the siege, on August 11, 2003, President Charles Taylor resigned and flew to exile in Nigeria. Three days later, two hundred American troops landed to support ECOWAS troops. On August 18, the Accra Comprehensive Peace Agreement (CPA) announced the forming of the National Transition Government of Liberia with Gyude Bryant as president. The agreement also scheduled Liberia’s first post-civil war national election for 2005. In that election, Ellen Johnson Sirleaf became the twenty-fourth president of Liberia and the first woman to head an African nation. Sirleaf continues to hold the office of president, and over a decade after the Accra Comprehensive Peace Agreement was worked out, Liberia remains at peace.