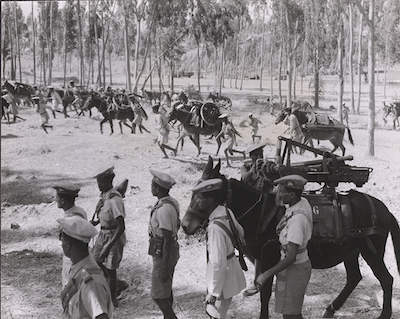 The Second Italo-Abyssinian War was Italy’s conquest of Ethiopia, a process it began after the 1885 Partition of Africa. Italy was defeated in its first attempt at conquest at the battle of Adwa in 1896, allowing Ethiopia to become the only African nation to remain free of European control. Italian colonial forces however still remained in neighboring Eritrea and Somalia, and it was only a matter of time before the two nations would clash again.

The prospect of war increased dramatically after the fascist dictator, Benito Mussolini, took control of Italy in 1922. He sought Ethiopia for its resources but also to salvage the pride of the only European nation defeated by an African country. Taking Ethiopia would have also completed the Italian domination over the Horn of Africa.

The initial conflict that sparked the war took place at Wal Wal, an oasis in the Ogaden Desert in 1934. On November 22, 1934, Italian forces marched fifty miles into Ethiopia and clashed with Ethiopian troops at Wal Wal, leaving one hundred and fifty Ethiopians and two Italians dead.  The League of Nations evaluated the conflict and exonerated both nations, although Italy was the clear aggressor. Great Britain and France, which dominated the League, hoped to prevent Italy from becoming an ally of Nazi Germany. Taking advantage of this situation, Mussolini signed agreements with France and the United Kingdom, thus isolating Ethiopia and forcing it to face Italy alone.

The impending attack from the Italians prompted Emperor Haile Selassie I to recruit and mobilize the Army of the Ethiopian Empire. His approximately half-million-man legion was armed with mostly bows and spears, with the exception of those who owned outdated rifles, some of which remained from the conflict forty years earlier. Only a quarter of the army had any combat training. With a miniscule arsenal of outdated artillery and anti-tank or aircraft guns, and a handful of planes including some piloted by African Americans and other volunteers, the Ethiopian nation was poorly prepared for the second Italian invasion.

By contrast, Italy learned lessons from its earlier defeat. By 1935 it had sent twelve Italian infantry divisions, approximately six hundred and eighty-five thousand troops to the Italian colonies surrounding Ethiopia. Italy also recruited additional soldiers from those colonies.  Beyond that, they also had heavy artillery, ground and air vehicles, and extensive supplies.

The war began on October 3, 1935, when General Emilio De Bono marched his troops over the Mareb River into Ethiopia before Italy officially issued a declaration of war. Emperor Selassie instead declared war on Italy, but the invading forces advanced rapidly into northern Ethiopia, taking both Adigrat and Adowa by October 6. The latter was where the Italians had been defeated in 1896. By mid-October, Italian troops had taken the ancient city of Axum, and by November 8, they had conquered Mek’ele as well. Nonetheless, Mussolini was impatient with what he called De Bono’s slow advance and replaced him with Field Marshal Pietro Badoglio.

In an attempt to test Italy’s new commander and rally his own nation, Selassie ordered a Christmas Offensive, counterattack against the Italians. Although the Ethiopians were initially successful and won the Battle of Dembeguina Pass where they defeated one thousand Eritrean troops under Italian command, the Italians continued their steady advance across the nation. On May 5, 1936, they took the capital Addis Ababa, and Emperor Haile Selassie was exiled and fled to Palestine and eventually to England. Mussolini then named King Victor Emmanuel III of Italy as the Emperor of Ethiopia.