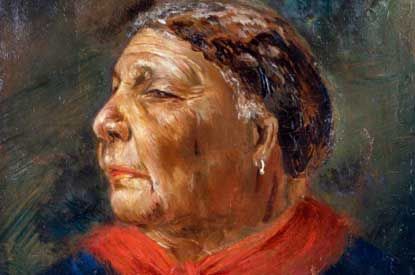 Mary Jane Grant Seacole was an early nurse in the British Empire during the 19th Century. Born in Kingston, Jamaica as Mary Grant, she was the daughter of a Scottish officer and a black mother. Mary’s mother ran a hospital/boarding house in Kingston and she, after a brief period as a servant, returned to her family home and worked alongside her mother. It was during this period that Mary’s skills as a nurse were first recognised and she spent a good deal of time travelling throughout the Caribbean providing care.  Mary Jane Grant married Edwin Seacole in 1836 but he died eight years later.

In 1850, Mary Seacole resided briefly in Panama with her half brother, Edward, where they ran a hotel for travelers bound for Gold Rush California. Seacole’s reputation as a nurse grew as she provided care for these mostly American travelers during several outbreaks of cholera.

In 1853, when Great Britain declared war on Russia, initiating the Crimean War, Seacole traveled to England to offer her services. The British government and the Crimean Fund initially rejected her offer of assistance. An old friend and distant relative, Thomas Day, however, provided Seacole with the necessary funds to travel to the Crimea and set up a hospital and boarding house for convalescing officers.  In the 1850s Crimea was part of the Russian Empire.  After the break up of the Soviet Union, it became part of Ukraine and only in 2014 was it annexed to Russia again.

On arrival in Turkey, Seacole sought out Florence Nightingale and offered her services. Nightingale refused but Seacole continued on to the Crimea despite having no official support.  When she arrived in the Crimea she constructed her hotel near the British lines surrounding Sevastopol out of driftwood and packing crates and opened its doors in March 1855. The “British Hotel” as it was called, soon thrived.

Nightingale continued her unfriendliness to Seacole’s efforts.  She later described the hotel as no better than a brothel because Seacole, without outside funds, sold alcohol to support her work.  Seacole, however, endeared herself to British soldiers and became famous for going to the battlefields to treat wounded men, often under fire.  To identify herself as a non-combatant to Russian soldiers, she wore brightly coloured clothes and ribbons in her hair. When Sevastopol fell to British forces, Mary Seacole was the first female nurse into the beleaguered city. There she treated both British and Russian troops.

When the Crimean War ended in 1856, Seacole left the Crimea almost penniless. On her return to England, she was declared bankrupt and only the intervention of Queen Victoria’s nephew, Prince Victor of Hohenlohe-Langenburg, saved her from destitution. The Prince helped set up a charitable fund for Seacole that people from across Britain donated to, including, surprisingly, Florence Nightingale.

In 1857 Seacole attempted to raise funds to travel to India to assist with the wounded in the Indian Rebellion. Her business partner, Day, persuaded her otherwise. By 1860 Mary returned to Jamaica.  Short of money once more, she received support from patrons including the Prince of Wales and the Duke of Edinburgh who provided her funds to purchase land and build a modest home in Kingston. By 1870 Seacole had returned to London where she treated, amongst others, Alexandra, Princess of Wales for rheumatism. Mary Seacole died in Paddington, London on May 14, 1881. She was 76 years old.

Despite her name being almost forgotten for over one hundred years, today Mary Seacole is recognized as a pioneer in British nursing.  A number of cities and universities have hospital buildings named after her including Salford, Birmingham City, and Thames Valley Universities.  A much larger number of hospitals have Mary Seacole wards.  In 1991 she was awarded the Jamaican Order of Merit and a few years later she was named as one of the 100 Greatest Black Britons.