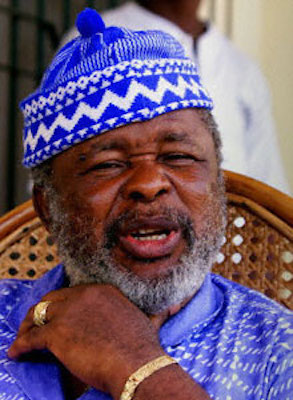 Foday Saybana Sankoh was the founder and leader of the Sierra Leone rebel group, Revolutionary United Front (RUF), during the Sierra Leone Civil War (1991–2002). That conflict, the first civil war in the nation’s history, resulted in the death of an estimated fifty thousand people and the displacement of over half a million people in a nation of just over four million people in 1990.

Sankoh was born on October 17, 1937, in the remote village of Masang Mayoso, Tonkolili District in the Northern part of Sierra Leone to an ethnic Temme father and Loko mother. He attended primary and secondary school in Magburaka, Tonkolili District and took on several jobs in Magburaka before he joined the Sierra Leone Army in 1956, five years before the nation gained independence from Great Britain in 1961. Sankoh’s military training took place in Nigeria and the United Kingdom.

In 1971 while a corporal in the Sierra Leone Army, Sankoh was expelled from the army’s signal corps and imprisoned for seven years at the Pademba Road Prison in Freetown for taking part in a mutiny. After he was released from prison, he worked as an itinerant photographer in the south and east of Sierra Leone where he first encountered young anti-government radicals. Sankoh and confederates like Rashid Mansaray and Abu Kanu in the late 1980s began calling for an armed uprising to oust the government of Sierra Leone President Joseph Saidu Momah. The three traveled to neighboring Liberia where they recruited dissident and exiled Sierra Leoneans for the RUF army. They also fought alongside the Liberian rebel group, Charles G. Taylor’s National Patriotic Front of Liberia (NPFL). Eventually Taylor would become the major African political supporter of the RUF.

On March 23, 1991, the Revolutionary United Front (RUF) led by Sankoh and backed by Taylor, launched its first attack of the civil war in villages in Kailahun District in the diamond-rich Eastern Province of Sierra Leone. RUF soon became notorious for brutal practices such as mass rapes and amputations of military opponents and civilians. Sankoh personally ordered most of the operations under the title “Operation Pay Yourself” that encouraged his troops to loot anything they could find. Eventually, Sankoh’s allies, Rashid Mansaray and Abu Kanu complained of Sankoh brutal tactics and in response both were summarily executed.

In March 1997, when government forces began taking back territory occupied by the RUF, Sankoh fled to Nigeria where he was put under house arrest and then imprisoned. Two years later, in 1999 Sankoh was released, and he returned to Sierra Leone. He was later arrested by Nigeria peacekeeping forces after his soldiers gunned down several protesters outside his Freetown home in 2000.

Sankoh was handed over to the British, and under the jurisdiction of a UN-backed court, he was indicted on seventeen counts for various war crimes, including the use of child soldiers and crimes against humanity which included ethnic extermination, enslavement, rape, and sexual slavery. On July 29, 2003, Sankoh died of complications from a stroke while awaiting trial at age sixty-five.