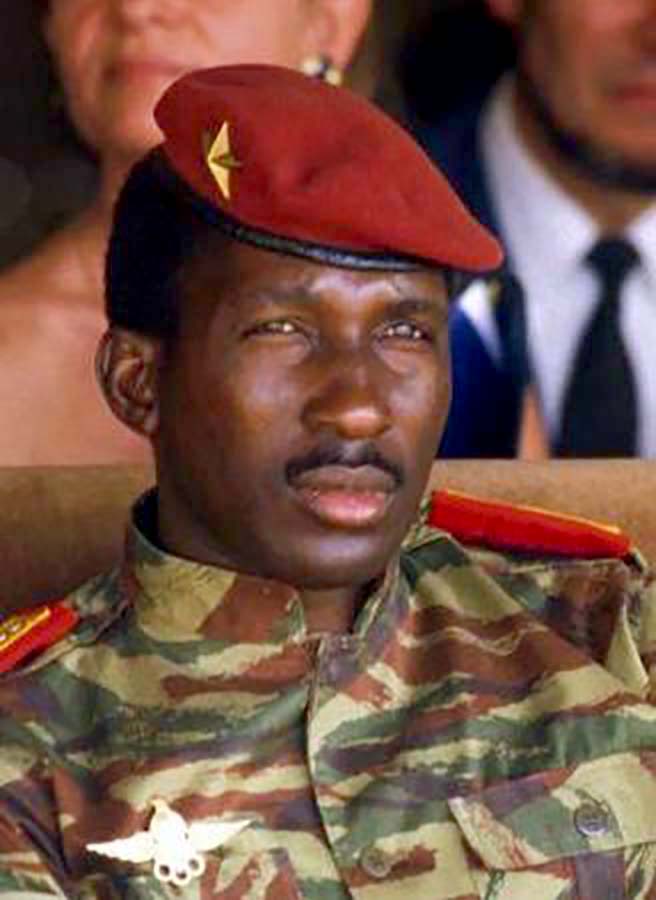 Thomas Sankara, political leader of Burkina Faso in the 1980s, was born on December 21, 1949 in Yako, a northern town in the Upper Volta (today Burkina Faso) of French West Africa. He was the son of a Mossi mother and a Peul father, and personified the diversity of the Burkinabè people of the area. In his adolescence, Sankara witnessed the country’s independence from France in 1960 and the repressive and volatile nature of the regimes that ruled throughout the 1960s and 1970s.

From 1970 to 1973, Sankara attended the military academy of Antsirabe in Madagascar where he trained to be an army officer. In 1974, as a young lieutenant in the Upper Volta army, he fought in a border war with Mali and returned home a hero. Sankara then studied in France and later in Morocco, where he met Blaise Compaoré and other civilian students from Upper Volta who later organized leftist organizations in the country. While commanding the Commando Training Center in the city of Pô in 1976, Thomas Sankara grew in popularity by urging his soldiers to help civilians with their work tasks.  He additionally played guitar at community gatherings with a local band, Pô Missiles.

Throughout the 1970s, Sankara increasingly adopted leftist politics.  He organized the Communist Officers Group in the army and attended meetings of various leftist parties, unions, and student groups, usually in civilian clothes.

In 1981, Sankara briefly served as the Secretary of State for Information under the newly formed Military Committee for Reform and Military Progress (CMRPN).  This was a group of officers who had recently seized power.  In April 1982, he resigned his post and denounced the CMRPM.  When another military coup placed the Council for the People’s Safety in power, Sankara was subsequently appointed prime minister in 1983 but was quickly dismissed and placed under house arrest, causing a popular uprising.

On August 4, 1983, Blaise Compaoré orchestrated the “August Revolution,” or a coup d’état against the Council for the People’s Safety.  The new regime which called itself the National Council for the Revolution (CNR) made 34-year-old Thomas Sankara president. As president, Sankara sought to end corruption, promote reforestation, avert famine, support women’s rights, develop rural areas, and prioritize education and healthcare. He renamed the country ‘Burkina Faso,’ meaning, “the republic of honorable people.”

On October 15, 1987, Thomas Sankara was killed with twelve other officials in a coup d’état instigated by Blaise Compaoré, his former political ally.  He was 37 at the time of his death.