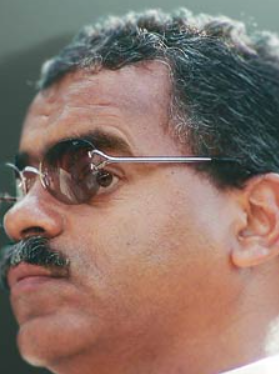 Apolinar Salcedo is a blind attorney and a former mayor of the city of Cali, Colombia, population 2.3 million. He was born in El Cerrito, Colombia, on February 22, 1955, the son of Luis Alfonso Salcedo, a cane cutter and tanner, and Zoraida Caicedo, a washerwoman. At age six he was accidentally blinded by a teenage playmate who shot him through the left temple, the .22 rifle bullet exiting his right temple. An unusually bright student, he spent nine years at the Institute for Blind and Deaf Children (El Instituto para Niños Ciegos y Sordos). Salcedo earned his bachelor’s degree at the Eustaquio Palacios College in Cali in 1974; with the assistance of a full scholarship acquired his law degree at the Cali Free Sectional University; and he obtained a graduate degree in public administration at University of the Valley (Universidad del Valle) in 1989.

One of Salcedo’s early government jobs was to prosecute traffickers of adulterated whiskey which, among other things, can cause blindness. He joked “I told people I could test it risk-free.” While working in the Department of Security he initiated and drafted Cali’s policy concerning its disabled citizens. In 1994, he made his first try for public office, winning an extremely close election for a seat on the city council. Re-elected in 1997, he was chosen to chair the council. Having supported laid off government employees, spoken up for the poor and disabled who comprised half of Cali’s residents, and attracting middle class and independent voters, Salcedo surprised his critics, disproved polling data, and won the 2003 election for mayor of the nation’s third largest city. But his upset win over the editor of El País, Cali’s leading newspaper, would not end well.

During his administration there were unfounded rumors of foreign bank accounts, a lavish house subsidized with taxpayers’ money, even ownership of a massage parlor. Salcedo considered the rumors ordinary dirty politics. There had long been talk of revamping transportation in Cali which Salcedo took seriously, but when he signed a contract with a consortium of businessmen called SiCali that would collect automotive taxes to fund the massive transportation project, he, along with the city attorney, were investigated for receiving kickbacks and for not having done due diligence in awarding the contract. His detractors also accused him of cronyism for appointing old friends to high office. One of his appointees was Gen. Luis Alberto Moore as Police Chief, the first person of African descent to achieve such a distinction in Colombia.

Though all but one of the 23 charges against him were dismissed, on May 8, 2007, the nation’s Attorney General replaced Salcedo as mayor and he was legally banned from seeking public office for a period of sixteen years. When his appeal to the Office of the Attorney General was denied, Salcedo retreated to practicing law and working as president of Gestos de Equidad Social (GES), a foundation that defends minority groups and advocates social equality.

Salcedo’s awards include the Gold Medal of the Colombian Civil Defense. He is an active member of the Cali Monarch Club (Club de Leones Cali Centro Monarca), the Valley Rehabilitation Regional Corporation, and has participated in the Companions of the Americas Program. Affectionately called “Polo,” in 1987 he married Ana Cecilia Tovar Montes. The couple have two sons, Andrés and Alfonso.