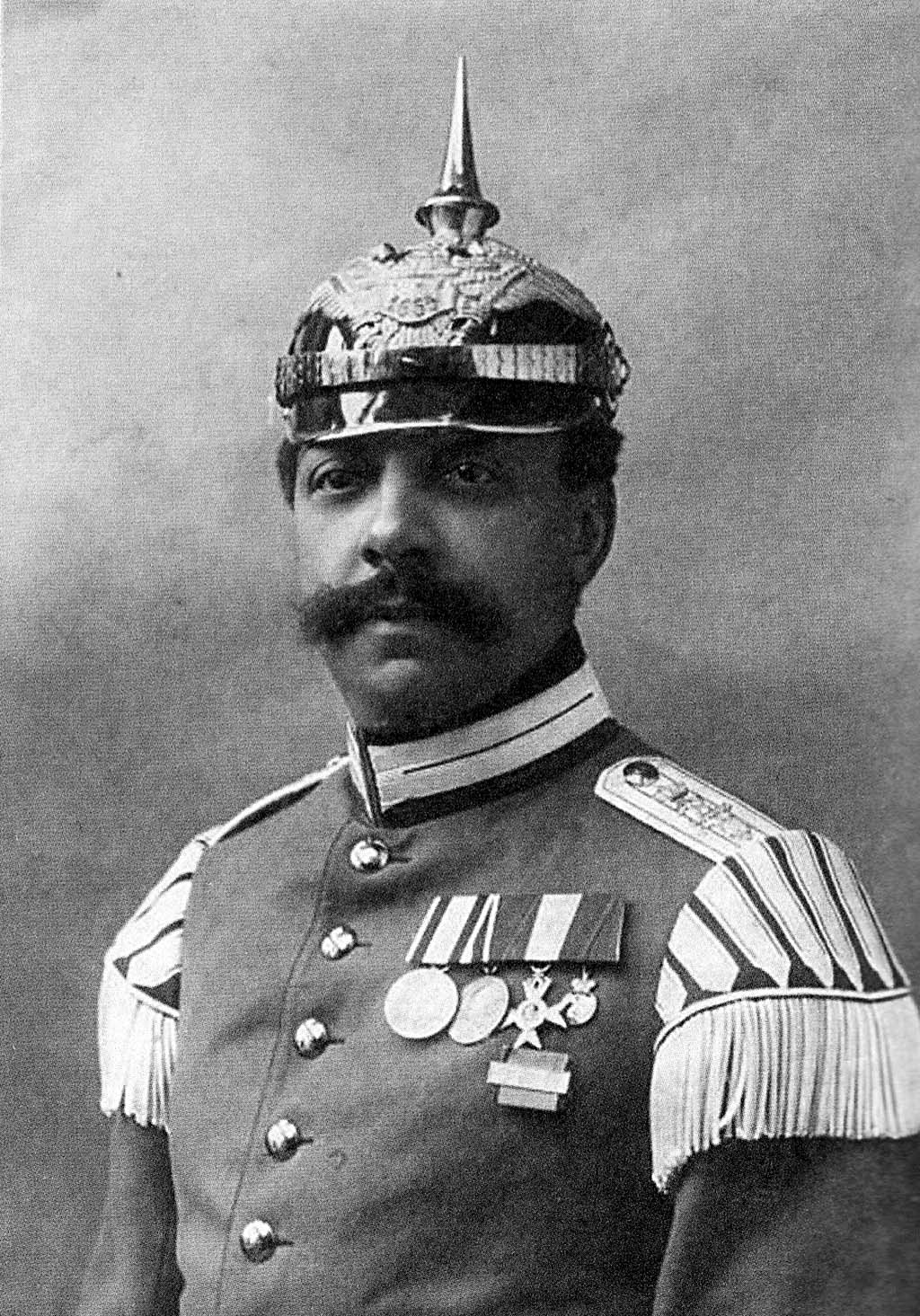 Afro-German band conductor and restaurateur Gustav Albrecht Sabac el Cher, born March 10, 1868 in a palace in Berlin, was the son of August Sabac el Cher (1836?-1885), a Sudanese man who as an orphaned boy in Egypt was presented as a gift to Prussian Prince Friedrich Heinrich Albrecht and accompanied him back to Germany to serve the prince as valet, butler, and decorated soldier. Gustav’s mother, Anna Maria Jung, was the daughter of a prosperous textile merchant.

Proficient with the violin since childhood, at age 17 Gustav entered military service as a musician and eventually received training at the Royal Academy of Music in Charlottenburg Palace in Berlin. During his tenure as Band Meister of the First Prussian Regiment of Grenadiers in Konigsberg he became somewhat of a celebrity known for his arrangement of military marches and Mozart overtures. Leaving the German Army in 1909, Gustav found freelance work directing orchestras in several cities and in the early 1920s was a pioneering radio orchestra conductor. He later owned a garden restaurant popular with tourists in Königs Wusterhausen in the state of Brandenburg.

Gustav lived a comfortable life with his wife, Gertrud Perlig, and sons Herbert and Horst. A staunch monarchist and nationalist, he welcomed the rise of fascism in Germany. However, his fortunes soon changed upon the election Adolph Hitler as Chancellor in 1933. When Nazi authorities declared his business “Negerlokal” (meaning Negro-owned), the restaurant was boycotted and forced to close. Plans to launch another restaurant in central Berlin ended when Gustav died in 1934. Recognizing his loyalty and contributions to German culture, Kaiser Wilhelm II, exiled in the Netherlands, sent a telegram to Gertrud expressing his condolences. Ironically, followers of the reactionary military veterans group Stahlhelm (Steel Helmet), of which Gustav was a member, placed a wreath decorated with swastikas on his coffin.

Both of Gustav’s sons fought for Nazi Germany in World War II. Horst was a medic in the Wehrmacht who went missing in action in 1943 during Germany’s invasion of Russia. Herbert was enlisted in the Volkssturm (national militia) but survived the war. Like his father, he enjoyed a career in music and was a violinist at the Mannheim National Theatre in post-war West Germany.

Neither Herbert’s daughter, Angela, a business executive, nor his son, Axel, a retired textile engineer and diving instructor living in Stuttgart, were fully aware of their African ancestry or of the achievements of their great grandfather August or grandfather Gustav until 1999 when they were contacted by a military historian researching the background of subjects in a painting purchased by the German Historical Museum. The work, executed in 1890, titled “Preussisches Liebesglück” (“Prussian Happiness in Love”) by noted artist Emil Donerstling, featured a young Gustav in uniform (skin color much darker than actual) affectionately embracing Gertrud.  Rediscovery of the painting and nearly a decade of research led to a television documentary and book on the surprising history of the Sabac el Cher family.