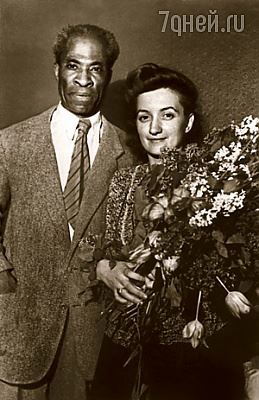 Wayland Rudd was an American-born actor who moved to the Soviet Union in 1932 as part of a group of 22 African Americans called the “Black and White Film Club.”  Before moving to the Soviet Union, Rudd gained recognition for his roles in The Emperor Jones and Othello and appeared in a number of Broadway productions.

Rudd, born in Lincoln, Nebraska in 1900, moved to the Soviet Union to escape the restrictive Jim Crow laws and racism of the United States that were holding him back from advancing his career.  Rudd originally traveled to the Soviet Union to participate in a film by German director Carl Junghans, but when that project was canceled, Rudd remained in Russia where he married a white woman, Lolita Marksiti, whom he knew from the United States.  They had one child, Lolita.

In 1934, Rudd returned to the United States with his wife and child only to reenter Russia two years later alone.  Rudd again expressed his frustration with the lack of opportunity in the US and looked forward to returning to the “liberated” theater of the Soviet Union.  Rudd denounced his US citizenship, remarried a Russian woman, had two more children, Victoria and Wayland, Jr., and would never return to the United States again.

Rudd worked in the Russian theater throughout the 1930s and 1940s where he acted in the plays Deep Are the Roots, The Prelude, and The List of Benefits.  Rudd also graduated from the prestigious Russian school Theatrical Art Institute in Moscow and studied directing at the State Institute of Theater Arts.

Rudd was a member of the well-known Meyerhold Theater and the famous Stanislavsky Opera and Drama Theater.  In 1933, he acted in Lew Kuleshov’s film The Great Comforter and wrote and directed his own plays including Andy Jones.

After the German invasion of Russia in 1941, Rudd performed at the Russian front.  Towards the end of his life, Rudd headed a drama company, directed plays and frequently gave lectures on racism in the United States.  Rudd was also the first black actor to play Othello in Russian. As a result he gained much admiration throughout the Soviet Union because he was one of the few black actors who would perform their parts in Russian.

Rudd passed away from appendicitis on July 4, 1952. According to fellow African American expatriate Bob Ross, “Wayland Rudd had been the leader of the Black community in Moscow.” The Soviet government arranged a special honor for him to lie in state in the Union Hall of the Theatrical Trade Union.  His son Wayland Rudd, Jr., (b. 1946) is a Russian jazz singer.