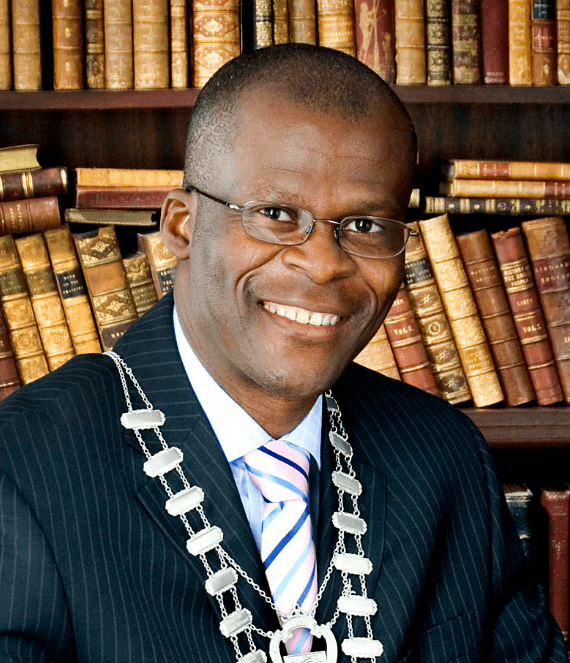 Rotimi Adebari is a Nigerian-Irish Politician who was elected the first black mayor in Ireland. Adebari was born in 1964 to unnamed parents in Okeodan, Ogun State, Nigeria. Although much of his early life is unknown, Adebari did receive a bachelor’s degree in economics from Benin University in Benin City, Edo State, Nigeria in 1993. Shortly afterwards he held a job in sales and marketing for the Ogun State television station. Adebari who at one time was a Muslim, converted to Christianity and then was forced to flee Nigeria along with his wife, Ronke, and two sons, Damilare and Opeayo, in 2000 to avoid religious persecution because of bloody clashes between Muslims and Christians in southwestern Nigeria. The Adebari family sought asylum in Ireland.

Adebari and his family settled in Portlaoise, Ireland in 2003. His application for asylum was initially rejected but the family was able to get residency rights in the country since a son was born in Ireland by that point. While living in Portlaoise Adebari became involved in several organizations including volunteering at the Abbeyleix Tennis Club in Abbeyleix, Ireland. He was also a training consultant on inter-cultural and anti-racism issues with the group Optimum Point.

In 2004 Adebari received a master’s degree in intercultural studies at Dublin City University and in the same year entered local politics when he was elected to the Portlaoise town council as an independent candidate. In 2006, Adebari launched an integration initiative called Voices Across Cultures. The initiative uses food, arts, and music to promote cross-cultural appreciation in Ireland.

In June 2007, Adebari was elected mayor of Portlaoise, becoming the first black mayor in Ireland’s history. During the June 2009 elections, Adebari retained his Town Council seat while securing a seat in the Laois County Council. His victory made him the first immigrant to be elected at that level of government in Ireland. In 2011 he was an unsuccessful candidate in the Irish National Parliament general election.

In 2005, Adebari was chosen as a jury member for the European Programme for Integration and Migration in Brussels, Belgium. Adebari was also credited with founding the Volunteering initiative for National University of Ireland in Maynooth, Ireland where he encouraged students to volunteer to address various social problems and issues. He was also a Director for the Portlaoise Educate Together National School Board of Management and the Irish National Organization of the Unemployed.

Adebari has served as a member of Community, Economic Development, Cultural Heritage, Sport, and County Promotion Strategic Policy Committee of Laois County Council. He has been the host of the radio program Respecting Difference, which celebrates cultural diversity and promotes racial integration. Adebari organized a non-profit organization called Books for Africa Ireland. The organization was responsible for donating books to institutions of higher education in Nigeria and the Democratic Republic of Congo.

In 2012, Alan Shatter, the Minister for Justice and Equality appointed Adebari a Peace Commissioner which is an honorary position in Ireland. Adebari had received many awards included the Worthy Ambassador and Global Achievers Awards, Bold and Beautiful Magazine Person of the Year, Xclusive Magazine Person of the Year, RTE & Metro Eireann Media and Multicultural Award, and the Social Entrepreneur Award.