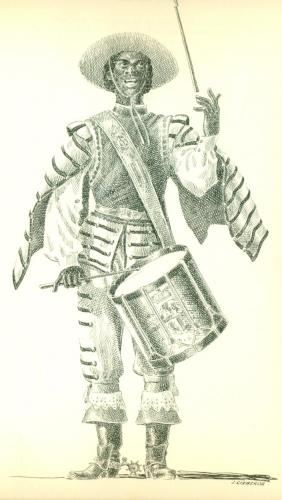 Native of West Africa, Sebastian Rodríguez Brito was one of a number of black freemen to join the ranks of the Spanish military during the time of the colonization of what is today the southwestern United States.  While a free black man in Spanish America, he was able to navigate through this uncertain frontier social order, becoming symbolic of the malleable state of race relations in Colonial New Spain during that time.

While his birth in Luanda, Africa to Manuel Rodríguez and Maria Fernandez is confirmed through marriage testimonials, Brito’s time of arrival in the Americas is not known.  He does appear in 1686 as a domestic servant to New Mexico Governor Reneros de Posada. During his stay with Posada, he developed his skills as a military drummer, an occupation that would allow for his social mobility.  Two years later as a freeman and resident, he became commissioned as town crier and garrison percussionist of the northern New Spain outpost of El Paso.

By 1691, however, he had joined the forces of the new governor, Don Diego de Vargas, in an attempt to wrest the northern portions of New Mexican colonial lands from indigenous Pueblo tribes.  Brito led columns of troops through drills, opened ceremonies and proclamations, and carried forces with the beat of his instrument.  Brito’s drumming became an omnipresent feature among the Spanish soldiers, both in El Paso and at the presidio at Santa Fe, becoming part of the victory procession after the reconquest of Pueblo lands.

As a free black man, Brito engaged in numerous affairs with women of various racial backgrounds.  Among them were failed marriage attempts with a New Mexico mulatta named Antonia Naranjo in 1689 and a mestiza, Maria de la Cruz, who had been a servant to a Spanish military officer. The former engagement was a subject of controversy as Brito’s past “employer,” de Posada, claimed that any marriage would be deemed illegal due to Brito already being legally bound to a woman in Veracruz.   In May of 1697, Brito again attempted matrimony, this time successfully.  Her name was Juana de la Cruz, a Salinas woman boasting a family racial background based on Spanish, indigenous, and African heritages.  With de la Cruz, Brito would father two children, Melchor and Margarita, the former becoming a founding member of the Santa Fe village of Las Trampas.

Having settled near the garrison of Santa Fe, Brito became a landowner and continued his work as a drummer for the Spanish colonial authorities, playing in further forays with native peoples.  His death occurred sometime around 1717.