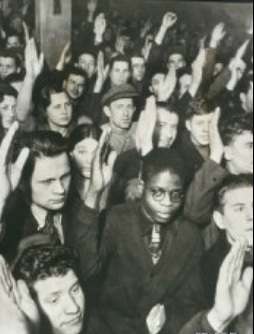 Robert Robinson after being elected to the Moscow Soviet, December 27, 1934
Courtesy Daily Herald, Fair use image

Robert Robinson was an engineer who became one of the most prominent Americans to live in the Soviet Union. Because of his presence in the U.S.S.R in the 1930s, Robinson became an international celebrity, meeting often with many famous African Americans who lived in and traveled to the Soviet Union. He personally experienced Stalinism and its various political purges, as many of his co-workers “disappeared” without a trace. He also experienced the paradox of Soviet internationalist discourse, which touted racial equality against the reality of the Russian people’s virulent racism against all non-Russian people, especially those of African origin.

Born in Kingston, Jamaica in 1906, Robinson and his Dominican mother, Octavia, lived in Cuba, where she worked for physician. Robinson trained in Cuba as a mechanical engineer before immigrating to the United States in 1930. He settled in Dearborn, Michigan, where he worked as one of a handful of black machinists at the Ford Motor Plant in the city.

That same year, a Soviet delegation visiting the plant to study Ford assembly-line production techniques, offered Robinson a higher salary, better living accommodations, and other perquisites to move to Stalingrad and work in a tractor factory.  Robinson accepted the offer, returning only once in 1933, to visit his mother in New York.

In 1934, Robinson was elected as a representative to the Moscow Soviet (city council). This election prompted many observers to conclude that he was a Communist, leading American officials in Moscow to demand his immediate return to the United States.  Robinson instead made arrangements to become a Soviet citizen and remained in the Soviet Union to complete his contract.  During this time, he also attended classes at Moscow Evening Institute of Mechanical Engineering.

During his forty-four years in the Soviet Union, Robert Robinson survived Stalinism, and the German invasion and experienced the first decades of the Cold War. He had attempted to leave the Soviet Union numerous times before finally being allowed to travel to Uganda in 1974. There he married Zylpha Mapp, an African American working in the country as an educator. Robinson finally returned to the United States in 1978.

His autobiography, Black on Red: My 44 Years Inside the Soviet Union: an Autobiography, remains an astonishing account of the life of an African American in Red Russia. Robert Robinson passed away in 1994 in Washington, D.C. He was 87 years old.