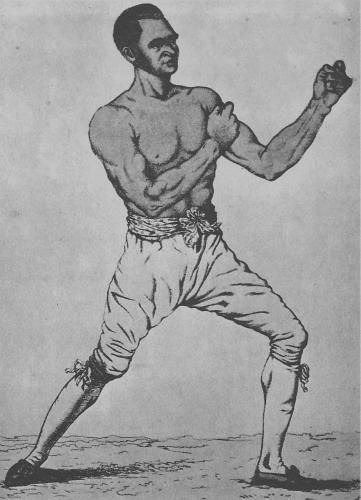 Bill Richmond, a.k.a. “The Black Terror”, the first black boxer to gain international recognition, was born in Cuckold’s Town (now Richmondtown), on Staten Island, New York, on August 5, 1763. In 1777 when the English troops held New York during the revolutionary war, he served their General Earl Percy, afterward the Duke of Northumberland. When Percy returned to England he took young Bill with him and sent him to school in Yorkshire. He also served as an apprentice to a cabinet maker.

The first glimpse of the talent he possessed with his fists came into view against Docky Moore, a soldier who insulted Richmond, and was promptly challenged to fight. Although considerably outweighed, Richmond thrashed the soldier and soon enjoyed similar success against others who attempted to insult him in ensuing years.

Richmond had his first professional fight in January of 1804, when he was 36 year old. He witnessed veteran boxer George Maddox in action and declared he could defeat him. Given the opportunity he failed miserably. Maddox stopped him in three rounds. Undeterred, Richmond entered the ring in May of 1805 and defeated a Jewish boxer known as “Fighting Youssep.” This contest gave him a reputation as a pugilist, and he was soon matched with boxer Jack Holmes, who was credited with giving Tom Cribb, one of the leading pugilists in England, one of his toughest fights. The win over Holmes after 26 grueling rounds set the stage for a match with Cribb in October 1805.

Now 42 years of age, Richmond demonstrated excellent footwork and sound defense against Cribb before enduring withering punishment from his 24 year old foe and succumbing to defeat in the 25th round. It was Richmond’s second and last defeat. In 1808 Richmond faced and defeated Jack Carter at Epsom Downs near London. In 1809 he had a rematch with George Maddox at Wimbledon Common and won after 52 rounds. Richmond married after this fight and with his winnings bought a pub, the Horse and Dolphin in Leicester Square, London. Richmond also opened a boxing academy and on occasion he fought in exhibition boxing matches. He also became a cricketer.

Bill Richmond died at his home in London in 1829. He was inducted into the International Boxing Hall of Fame in 1999.