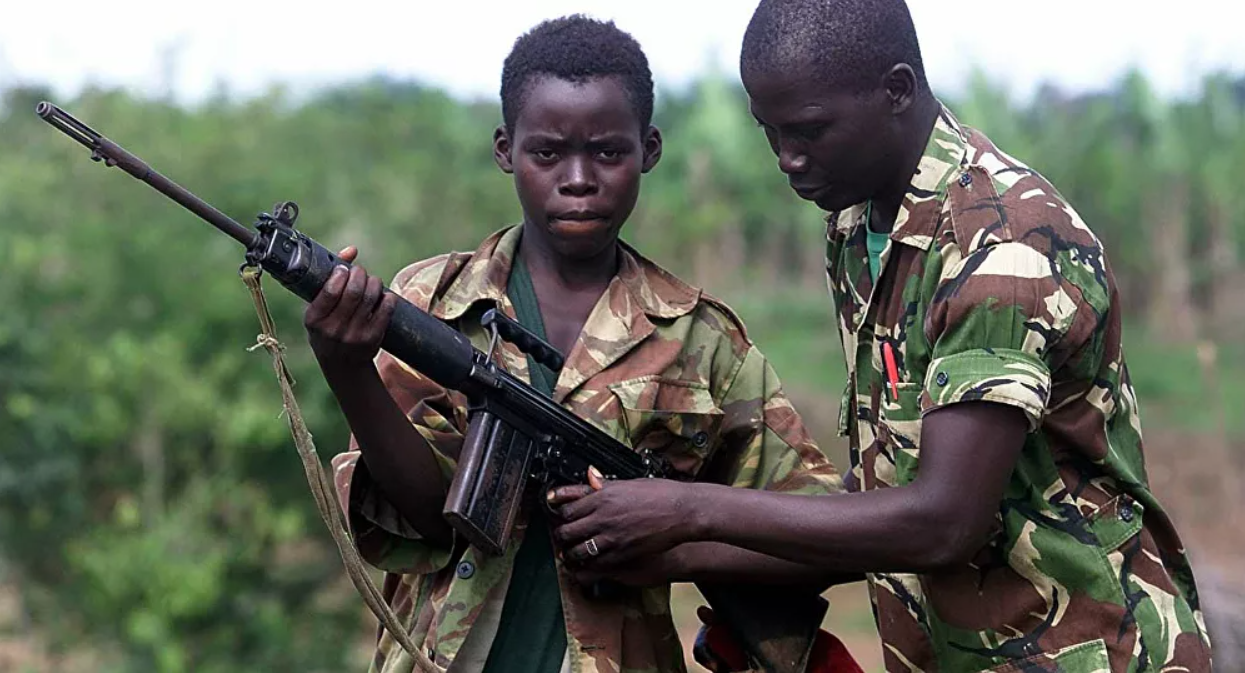 The Revolutionary United Front (RUF) was a rebel army that fought in the Sierra Leone Civil War, 1991–2002. The RUF was created by Foday Sankoh along with allies that included Abu Kanu, Rashid Mansaray, and most of the Mende ethnic group in the southern and eastern provinces of the country. They also received crucial support from Charles Taylor from Liberia both when he led a rebel group in that nation and when he became the country’s ruler.

The RUF was at first popular among Sierra Leoneans who resented the corrupt Freetown political elite which had dominated politics in that nation. Not identifying with any ethnic group or region, they initially promised free education and healthcare and an equitable sharing of diamond revenues mined in their region. They adopted the slogan, “No more Slaves, No More Masters. Power and Wealth to the People.”

Yet the RUF gave little indication of what sort of government they wanted to replace the regime of Sierra Leonean President Joseph Saidu Momah. Instead they developed a reputation of cruel violence inflicted on the civilian population in the decade-long war, including rape, torture, kidnapping, and mutilation, all designed to spread terror among the population. They were also known for their extensive use of child soldiers.

When the Sierra Leone Civil War first started in March 1991, the RUF’s initial attacks were along the country’s eastern border with Liberia. Within a month, it had taken control of much of the diamond-producing eastern region of Sierra Leone.  They seemed on track to defeat the regular Sierra Leone army and overrun Freetown, the capital and overthrow the government.
As its terror campaign continued, however, they lost much of their popular support. By 1994, their atrocities against the civilian population had caused thousands of Sierra Leoneans to flee to neighborhood Guinea. By the end of 1994, the RUF had enslaved rural workers in the country’s diamond mining region, forcing them to produce “blood diamonds” to finance their cause. They had also displaced nearly half of the nation’s four million people.

The beleaguered Sierra Leonean government hired Executive Outcomes (EO), a South African mercenary group to fight the RUF. By May 1995, they pushed back RUF forces from the edge of Freetown and the following year regained control of the diamond mines. RUF Sankoh fled to Nigeria and was arrested there in March 1997. He was released two years later, returned to Sierra Leone, and promptly continued the fight against the government and atrocities on the civilian population.

In 1999, prompted by the continued fighting and civilian casualties, the United States and Great Britain orchestrated a United Nations intervention and forced Sankoh to accept the Lome Peace Accord on July 7, 1999. The agreement gave Sankoh and other rebels a role in the government in exchange for their disarmament.

Despite the agreement, RUF soldiers continued their attacks on civilians as well as on UN peacekeeping troops. After defeats of the RUF by Indian troops and British Special Forces, Sankoh was recaptured by Sierra Leonean government forces in May 2000. The disbarment of the RUF began one year later in May 2001, and the Sierra Leone Civil War officially ended in January 2002.

A UN Special Court for Sierra Leone set up in 2002 indicted five leading members of the RUF, including Sankoh and associates, Sam Bockarie, Issa Hassan Sesay, Morris Kallon, and Augustine Gbao for war crimes. Sankoh and Bockarie died before their trials, and the other three were tried together and found guilty on February 25, 2009.  They are currently serving fifty-year sentences in Rwanda.