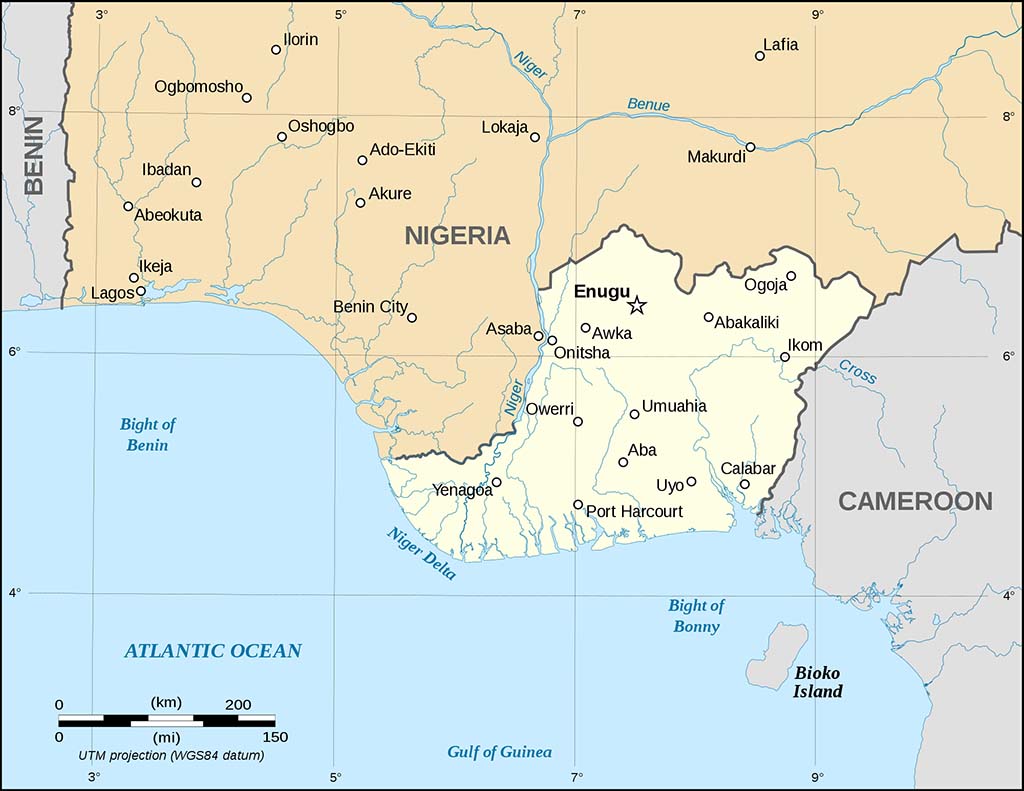 The Republic of Biafra was a short-lived Nigerian secessionist state which came into existence on May 30, 1967 when the Igbo-dominated southeastern corner of Nigeria seceded in the formation of its own independent country.  Following its defeat in the Nigerian Civil War (1967-1970), on January 15, 1970 Biafra was reabsorbed into Nigeria.

Following decades of ethnic strife under colonial rule, Nigeria fell into disarray immediately upon gaining independence from Great Britain on October 1, 1960.  The Igbo military coup d’état of January 15, 1966, touted by Igbo leaders as a rescue attempt to save Nigeria from dissolution, only served to heighten suspicions among the Hausa-Fulani and Yoruba people.  The installed Igbo leader, General Johnson Thomas Umunnakwe Aguiyi-Ironsi, only exacerbated fears of an Igbo subterfuge when his government became overrun with corruption, nepotism, and regional and ethnic prejudice.

Closing ranks to oppose Igbo leadership, Hausa Fulani and Yoruba leaders toppled Ironsi’s regime in a July 29, 1966 countercoup which installed General Yakubu Gowon, a Hausa-Fulani, as head of state. Shortly after the countercoup, widespread ethnic violence erupted against those Igbo residing in northern Hausa-Fulani regions.  Beginning in September of 1966 and lasting until mid-October of the same year, an estimated 10,000 Igbo were slaughtered.  Several thousand more were maimed in the attempted genocide, and close to two million became refugees within the borders of their own country.

For the duration of the violence, Igbo cries for justice fell upon deaf ears in Gowon’s government.  This indifference to their suffering convinced Igbo leaders that the safety of their people was only guaranteed in the east.  Galvanizing support for Igbo self-determination, the outspoken Igbo politician General Chukwuemeka Odumegwu (Emeka) Ojukwu publicly opposed Gowon amid Igbo talk of secession.

Tensions heightened precipitously early in 1967.  On May 30, 1967, Ojukwu declared the Republic of Biafra.  The Gowon government immediately launched a military offensive against the new country. Federal forces surrounded Biafra.  Aerial and artillery bombardment killed Biafran soldiers and civilians.   The Nigerian Navy also established a sea blockade that denied food, medical supplies, and weapons, again impacting both Biafran soldiers and civilians.  The Nigerian government increased the suffering by its decision on June 30, 1969 to ban Red Cross food shipments.  By this point hundreds of thousands of Biafrans were starving. During this civil war, an estimated 3,000 to 5,000 people died daily in Biafra from starvation as a result of the naval blockade.

Biafra was never successful diplomatically. Only Haiti and four African nations, Gabon, Côte d’Ivoire, Tanzania, and Zambia gave official recognition.  Informally Israel, France, Portugal, Rhodesia (present-day Zimbabwe), and South Africa provided support as did the Vatican partly because the Biafran were overwhelmingly Catholic.  Despite the lack of resources and international support, Biafra refused to surrender in the face of overwhelming Nigerian military superiority.  The Nigerian Army however continued to slowly take territory, and on January 15, 1970, Biafra surrendered when its military commander General Chukwuemeka Odumegwu Ojukwu fled to Côte d’Ivoire.