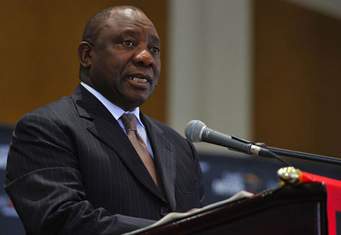 Cyril Ramaphosa is South African businessman and politician who is also the fifth president of South Africa and a member of the African National Congress (ANC), beginning his term on February 15, 2018. Ramaphosa is ranked the 21st wealthiest African in the world with an estimated value of 675 million that he has developed through his business ventures.

Born on November 17, 1952, in Soweto, Cyril Ramaphosa experienced the force of apartheid in South Africa for many years. He studied law starting in 1972 at the University of the North in Mankweng, Limpopo where he became involved in activist work, being detained twice in the 1970s, once for eleven months in 1974 and a second time for six months in 1976, both for resisting and protesting apartheid.

Ramaphosa continued his career after receiving his law degree from the University of South Africa in 1981. He became the general secretary for the National Union of Mineworkers in 1982. He served in this position until 1991 when he was elected for a different general secretary position, this time for the ANC. As general secretary of the ANC, Ramaphosa worked closely with Nelson Mandela to bring about the end of apartheid and lead South Africa into a more democratic direction. Ramaphosa was close enough and trusted enough by Mandela that he was in fact the man that Mandela suggested being the deputy president under him as he became the first black president of South Africa.

Although he was Nelson Mandela’s pick, Cyril Ramaphosa narrowly lost the position to Thabo Mbeki, who became the president of South Africa in 1999. Since then, Ramaphosa focused his energies on business, becoming a successful businessman through his ventures into markets such as mining.

However, Ramaphosa is not without his scandals. In 2012, Ramaphosa was followed by a controversial scandal during a mining strike at a Lonmin-owned Marikana mine near Rustenburg, South Africa. As protests worsened, Ramaphosa urged a stronger police presence at the site of the strike, which led to a shootout where the police killed thirty-four mine workers. This scandal is known as the Marikana Massacre and has continued to follow Ramaphosa’s career.

Ramaphosa has been married three times and is currently wedded to Tshepo Motsepe. He has five children in total between the three marriages.