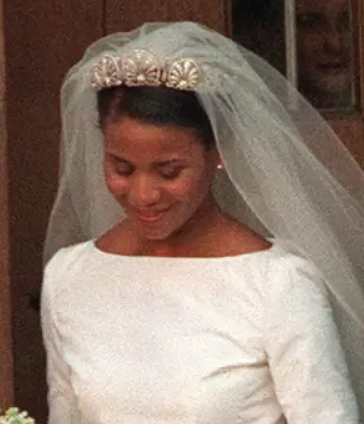 The transition of African American actress Meghan Markle to Duchess of Sussex in 2019 brought about by her marriage to Prince Harry, a member of the British royal family, overshadowed the earlier occurrence of the first person of African descent to marry into European royalty in the modern era: that of Angela Gisela Brown to Prince Maximilian of Liechtenstein. Born February 3, 1958 in Boca del Toro, Panama, Angela was the daughter of businessman Javier Francisco Brown and Silvia Maritza Burke, a homemaker. At age five her family moved to New York City. There she finished elementary and high school prior to entering the Parson’s School of Design where as a fashion design student she won the coveted Oscar de la Renta Gold Thimble Award. After graduation in 1980 she partnered with a firm in Hong Kong to establish her own fashion label called “A. Brown” before taking employment at the clothing firm, Adrienne Vittadini as a fashion director.

Angela first met Maximilian, born Maximilian Nikolaus Maria von Liechtenstein, the second son of the currently reigning Prince Hans-Adam II, at a private party in New York in 1997. Maximilian, a successful Harvard-educated investments executive, offered her an engagement ring in the summer of 1999. Following a civil ceremony on January 21, 2000 in the capital city of Vaduz, Liechtenstein, the couple wed again on January 29, 2000 in the Church of St. Vincent Ferrer on the Upper East Side of Manhattan. Though there was said to be some apprehension within the royal family about an interracial marriage and the fact that Angela was eleven years older than Maximilian, such concerns were brushed aside. In the wedding audience of 500 were the parents of the bride and groom as well as other family members. Angela wore the bridal gown she designed and atop her head was the Kinsky tiara, an heirloom kept in the House of Liechtenstein since 1870.

Angela had sold her fashion business in 1999 and the couple planned to relocate to the German-speaking Principality of Liechtenstein, a constitutional monarchy nestled in the Alpine mountains between Austria and Switzerland. Liechtenstein is one of the smallest nations in the world with a population of only 38,000. Since her marriage she has maintained a low public profile and routinely declines interviews.

The trajectory of Maximilian’s career paralleled the fortunes of the LGT (Liechtenstein Global Trust) Group, the largest family-owned private wealth and asset management firm in Europe. Maximilian is the Chief Executive Officer (CEO) of LGT. The combined wealth of the members of the House of Liechtenstein reportedly exceeds the wealth of the British royal family.

The union of Angela and Maximilian produced a son, Prince Alfons Constantin Maria von Liechtenstein, born on May18, 2001. He is sixth in line to the throne.