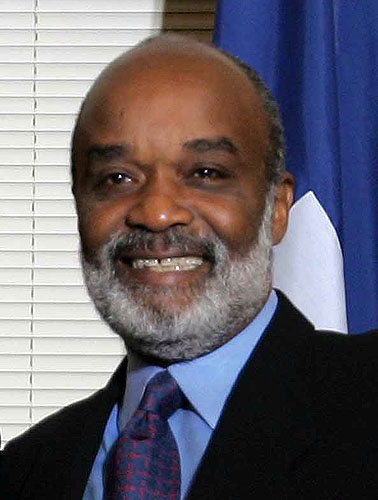 René Préval was a Haitian politician. He was prime minister under the presidency of Jean-Bertrand Aristide, exiled to the United States of America, and finally president of Haiti between 1996 and 2001, and 2006 and 2011.

René Préval was born on January 17, 1943, in Port-au-Prince, Haiti. The son of agronomist Claude Préval, who served as minister of Agriculture under President Paul Magloire, René Préval was raised in the small but politically influential black middle class of Haiti. At the age of 19, he founded a clandestine leftist organization that resisted the François Duvalier dictatorship between 1957 and 1964.

After he obtained his Baccalauréat (high school degree), he left Haiti in 1963 with his family for France. Préval attended the College of Gembloux and then went to the University of Louvain to study agronomy. After his graduation from Louvain, he went into exile in 1970 in Brooklyn, New York. For the next five years, he struggled to earn a living in the United States as a restaurant waiter.

In 1975 Préval returned to Haiti which was still under dictatorship but which was less authoritarian and less violent than when he left there. In 1986 the President Jean-Claude Duvalier (François Duvalier’s son), facing an insurrection, fled Haiti. Two years later, Préval opened La Boulangerie du Centre (The Center Bakery) in Port-au-Prince. Although in public he was an entrepreneur, he continued his commitment to politics through the radical Mouvement d’Action Démocratique (MAD – Democratic Action Movement). During this time, Préval often gave bread to the association “La famille, c’est la vie” (Family is life) founded by the priest, Jean-Bertrand Aristide, who had also opposed the Haitian dictatorship. Préval and Aristide became close friends and political allies. In December 1990, Aristide was elected president of Haiti and three months later, he chose René Préval as prime minister.

A military coup on September 30, 1991, forced Aristide from power. Préval fled to Washington D.C. In 1994 the United States restored Aristide to power, and Préval returned to Haiti to become chief of the Economic and Social Action Fund.

In December 1995, Préval became candidate for the presidency of Haiti. He was elected with 88 percent of the vote. During his term in office, he continued the reforms that Aristide had begun.  However, the relationship between both men worsened as Aristide and his followers attempted to undermine Préval’s policies. In 2001 when Aristide was again elected president, Préval decided to leave politics and begin farming.

In 2005 Préval again became a candidate for president and won the campaign on February 7, 2006, with 51 percent of vote. His second term, however, was marred by an economic crisis and problems of famine. As a result, his power was contested and undermined. At the end of 2009, Préval signed treaties with Cuba and Venezuela, but he managed to keep good relations with the United States. This allowed an increase in foreign investment and improved the economic health of the country.

In January 2010, a devastating earthquake struck Haiti, killing more than two hundred thousand people and destroying Port-au-Prince. Préval was accused of a timid response to the disaster and of allowing corruption to undermine the reconstruction process in the nation. Because of these charges, Préval left office at the end of his second term in 2011 and again retreated from politics.

René Préval died on Friday, the third of March 2017, in his house in Lamoule, in the suburb of Port-au-Prince. He was seventy-four.