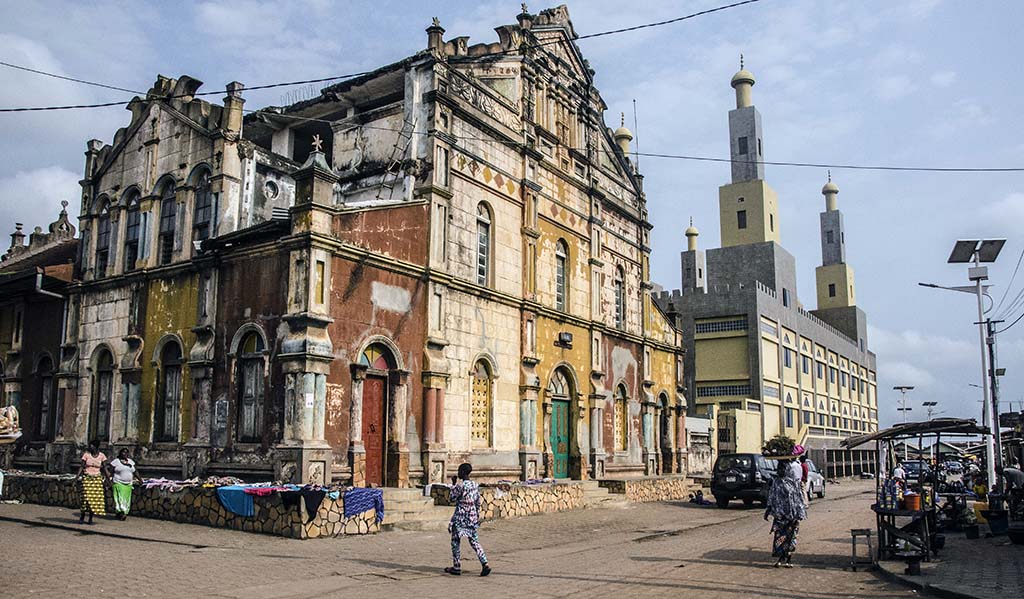 Porto-Novo, meaning “New Port” in Portuguese, became the official capital of the West African country of Benin in 1960. In 2002 it had an estimated population of 223,552 people. Porto-Novo is located in the southeastern part of the country on an inlet of the Gulf of Guinea. Although it is the capital of the country, it remains the second largest city behind Cotonou.  Many national government operations take place in Cotonou which is also the economic hub of Benin. Porto-Novo is however the administrative and shipping center of the country.

The city of Porto-Novo was founded around the late 16th century by King Te-Agdanlin of Allada. Soon afterward Portuguese traders arrived to buy slaves from Allada and from neighboring Dahomey.  By the 18th Century Porto-Novo was a major West African slave port operated by the indigenous people but supported by Portuguese merchants who resided permanently in the city.  Most of the slaves from Porto-Novo were destined for Brazil but some reached Spanish America, the French Caribbean, and French Louisiana.

The British, who had colonized nearby Southern Nigeria in 1860, attacked Porto-Novo in 1863. After the attack the city accepted a French military presence for protection against the British.  By 1883 the French now controlled Dahomey and annexed Porto-Novo into that colony.  In 1900 Porto-Novo became the capital of the entire colony of Dahomey.  In 1960 the colony of Dahomey gained its independence from France.  Fourteen years later in 1974, Dahomey became the People’s Republic of Benin after a military coup.

Due to the area’s five century history of contact with Europeans and later its nearly century long direct control by the French, there is significant western influence. The main language spoken in the city and in the country is French due to that long influence.  Nonetheless there are a number of other languages spoken in the city including Yoruba.  Portuguese is also spoken because there were also a number of Afro-Brazilians who had come to Port-Novo after 1889 when slavery ended in Brazil.  Most of the population of the city is either Christian or Muslim.

The city is geographically divided into a French section and a traditional section.  Local Benin people are the majority in both sections but the French influence is more pronounced in the “European” section of the city where French architecture has long been dominant.  The major financial and commercial institutions are located there as are the hotels, restaurants, and tourist attractions including the Port-Novo Museum of Ethnography, King Toffa’s Palace, and the Da Silva Museum.

Many in Port-Novo work in the export industry where cotton, palm oil, petroleum, corn, marble, and limestone are the main items shipped abroad.  Coastal erosion is a growing threat to the city of Port-Novo due to rising sea levels and a loss of shoreline. Voter fraud and corruption plague the political process and election results are often disputed.