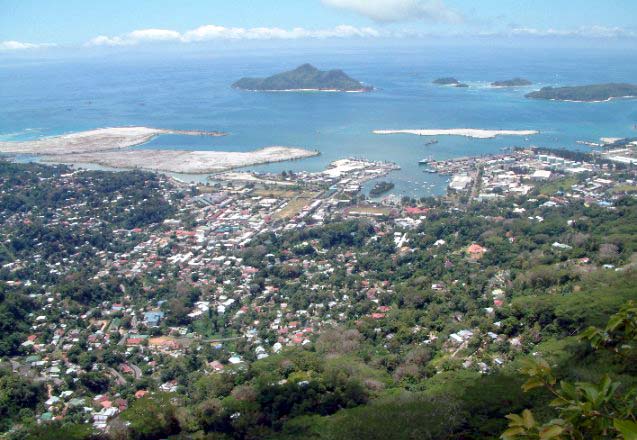 Victoria is the capital city of the Republic of Seychelles, a country made up of 115 small islands in the Indian Ocean of which 46 are uninhabited.  It has been the nation’s capital since the country gained its independence in 1976. Victoria is the country’s largest city and the least populous African capital, with only 25,000 people in 2009. The city is located on the northeastern side of the 142-square-kilometer island of Mahé, the main island of the Seychelles. Although Seychelles is located about 1,500 kilometers away from the eastern coast of Africa and 925 kilometers away from Madagascar, it is still considered part of the African continent. The islands have a humid tropical climate with two seasons: a wet warm season from November to April, and a dry cool season from May to October.

The history of Seychelles and Victoria had its beginnings when early explorers and traders from Africa and Asia visited the islands. In 1502 the first Europeans to most likely see the islands sailed with Portuguese Admiral Vasco de Gama during his exploration of the African continent and Indian Ocean basin. In 1756, at the early site of present day Victoria, Captain Corneille Nicolas Morphy claimed the islands as a possession of the French crown. The islands were named after Jean Moreau de Sechelles, King Louis XV’s Minister of Finance. The town and surrounding islands were formally colonized in 1772 by the French. Great Britain eventually gained control of the islands in 1810 as a consequence of the Treaty of Paris.

Both the British and French used enslaved Africans to work on their plantations on the islands. After slavery was banned in 1835 the British imported Indians to work the land as indentured laborers. In 1841 the British named the town Victoria after the British Queen Victoria. Seychelles gained its independence in 1976 from Great Britain, and Victoria became the capital of the country.

Victoria is the country’s commercial, shipping, and tourist center.  Constructed to help accommodate larger ships and increase ship turnaround, the Port of Victoria was opened in 1975. The Port’s main exports are coconuts, coconut oil, fish, and guano. Today, however, tourism is the major part of Victoria’s economy because of the area’s beaches and ocean waters.

Culturally the islands are very diverse and contain many migrants, although there is a large French influence. The main ethnicities are of African, Chinese, French, and Indian origin. The main languages are English, French, and a local language derived from French called Seychellois Creole. Over 90 percent of the people are Christian, with a majority of them being Roman Catholic.