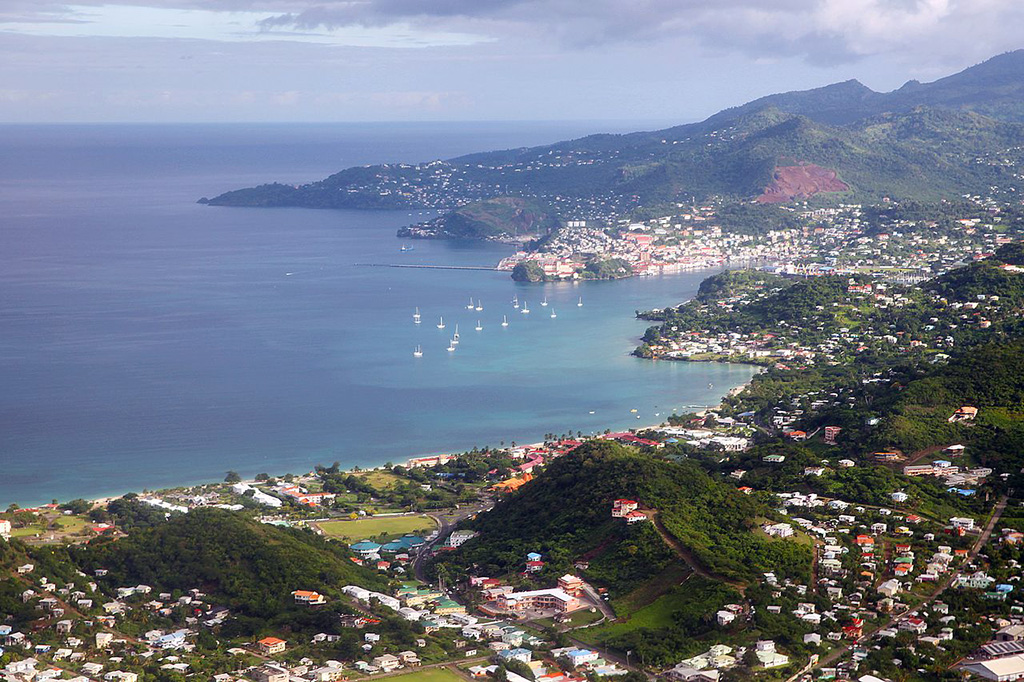 St. George’s is the capital of Grenada, an island nation located in the eastern Caribbean Sea. The city has an estimated population of 4,300 people in a nation of 105,897 people (2012). St. George’s is positioned on the island’s southern coast on a small peninsula that has a shallow exterior bay and deep harbour. The main exports are bananas, cocoa, and nutmeg while sugar processing and rum distilling are local industries.

The history of St. George’s began in 1649 when the French established a settlement due to the large sheltered harbour ideal for anchorage. In 1706 the settlement moved to the city’s present location and was named Port Royal.

The British military sailed into Port Royal on March 3, 1762 and conquered the Grenada colony. The Treaty of Paris in 1763 gave the British control of the island.  Port Royal became the seat of the Colonial Government of Grenada and the British renamed the town St. George’s in honour of King George III.  When the city was almost completely destroyed by fire in 1771, King George personally donated funds for its reconstruction.  By this point St. George’s was a major port for the trans-Atlantic slave trade and persons of African ancestry both enslaved and free soon became the majority of its inhabitants.

In 1779 the French briefly gained control of Grenada during the period of the American War of Independence.  At the end of the conflict the British regained the island as a result of the 1783 Treaty of Versailles. Ten years later, in 1793, the city was hit with an epidemic of yellow fever.

St. George’s became the capital of the newly independent nation of Grenada in 1974.  Eric M. Gairy was the nation’s first prime minister until his government was overthrown in 1979 by the Marxist New Jewel Movement led by Maurice Bishop.  When Bishop developed close ties with the Cuban government and the Marxist Sandinista government in Nicaragua, the U.S. became concerned about the island’s politics.

On October 25, 1983, following Bishop’s assassination by a political rival in the New Jewel Movement, United States President Ronald Reagan ordered 6,000 Marines to invade and secure the safety of American nationals in Grenada.  U.S. forces defeated the Grenadian and Cuban soldiers who resisted the invasion and by December 1983, a new government was installed. Much of the fighting in that military campaign took place in and around St. George’s.

The city’s population in 2012 was 82% black, 13% of mixed African and European ancestry, and about 5% East Indian and European.  Distinguished landmarks in St. George’s are the Anglican, Roman Catholic, and Presbyterian churches. Fort George, an 18th Century British fortification, is located at the tip of a promontory near the city center while Government House, the seat of the island’s parliament, is on a slope overlooking the city.