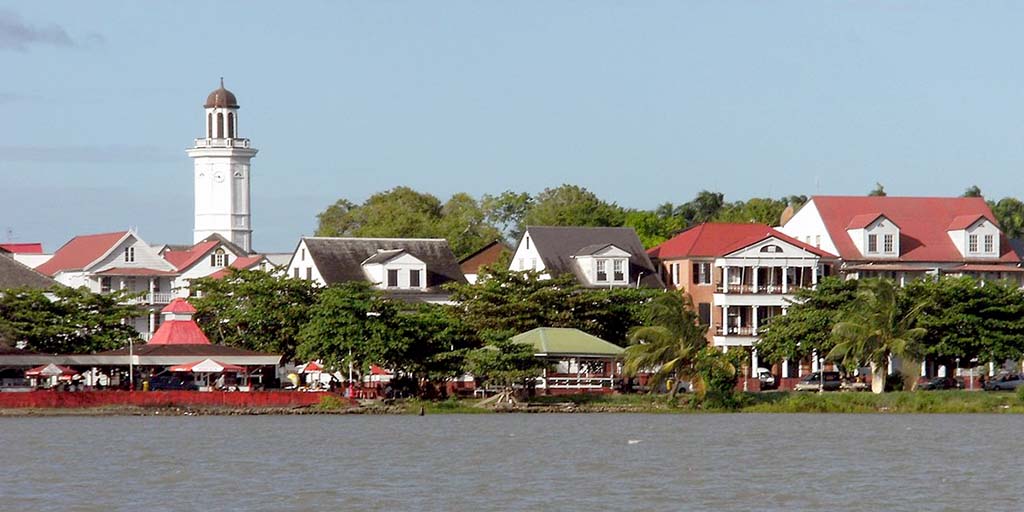 Paramaribo is the largest city, chief port, and capital of Suriname, a country located on the north coast of South America and the continent’s smallest nation. The city had a population of 250,000 people in 2014 who comprised about half the population of the entire country. Paramaribo was established on the River Suriname which is 15 km (9.3 miles) from the Atlantic Ocean. The city occupies an area of 180 square km, or 111.8 square miles, and has an elevation of five meters. Paramaribo has a tropical rainforest climate and it rains throughout most of the year.

The history of Paramaribo began in 1603 when the Dutch founded the city as a trading post. The English were the first to establish a permanent settlement in the area in 1630. In 1650 Paramaribo became the capital of the English colony of Suriname. The Dutch reclaimed control of the colony through The Treaty of Breda (1667) and Paramaribo became the capital of Dutch Guiana. Ironically the Dutch had the opportunity to reclaim New Netherlands (now New York) which the British had seized in 1664, but chose instead to insist on control of Dutch Guiana because of its potential for sugar production.

Both the Dutch and the English settlers established a plantation economy along the coastal region of Suriname that was fueled by enslaved labor from Africa. The main cash crops grown were cocoa, coffee, cotton, and sugarcane. In 1863 the Dutch abolished slavery in their overseas colonies but mandated a 10-year transition period before the freed people could travel beyond the plantations. In 1873 many of the former slaves settled in Paramaribo making it a predominantly black city.

In 1975, when Suriname became an independent nation, Paramaribo was declared the capital. Due to the post-independence discovery of gold and oil and the rise in the price of bauxite, Paramaribo became a prosperous South American capital city.

Paramaribo has numerous landmarks and festivals that reflect the area’s rich history and culture.  Independence Site, in the center of the city, memorializes the year of Suriname’s freedom from Dutch control.  The ruins of Jodensavanne south of the city are on the site of the first significant Jewish settlement in the Western Hemisphere. In 1640 Jews fleeing the Spanish Inquisition created the colony which eventually embraced European and Brazilian Jews fleeing persecution. Pagara Estafette, celebrated on December 13, is the country’s most popular festival.  It is highlighted by a huge street party, celebrations throughout the day, fireworks, concerts, and cultural activities.

The population of Paramaribo is composed of people from many different ethnicities and origins. The Creoles and Maroons (descendants of African slaves) are about 38% of the population, East Indians (descendants of 19th century contract laborers from India) 28%, Indonesians, 14%.  The remaining 20% are a variety of groups including people of Chinese, European, and indigenous descent. The official language is Dutch but many residents also speak Sranan Tongo which is a native creole language.