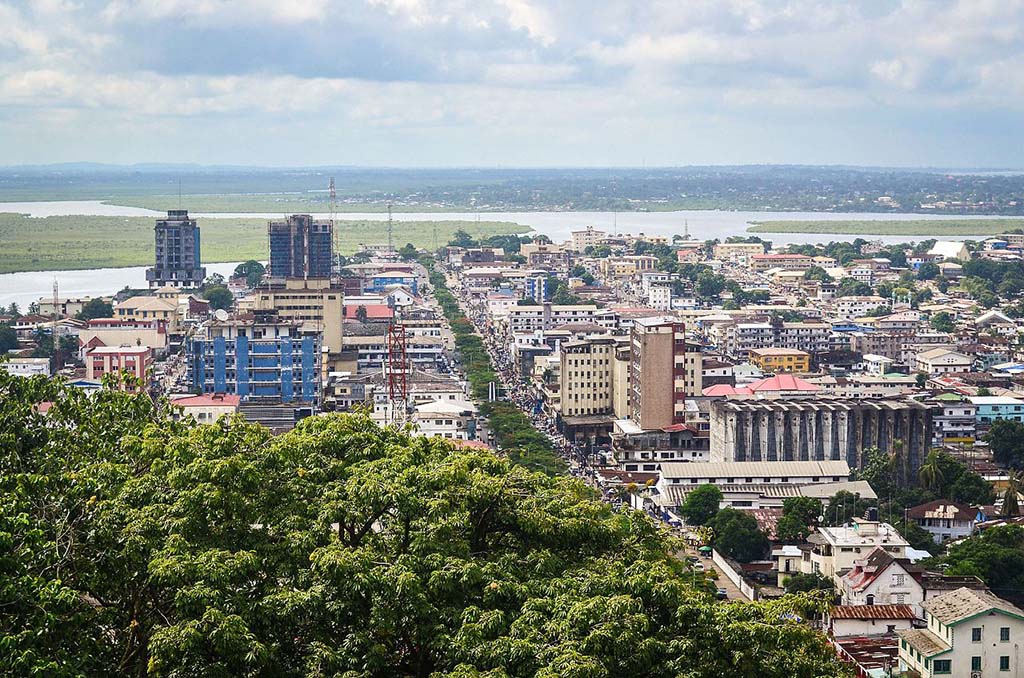 Monrovia is the capital of Liberia as well as its largest city. It is located on Bushrod Island and Cape Mesurado along the Mesurado River. A 2008 census showed its population as 970,824.

Monrovia was founded on April 25, 1822 by members of the American Colonization Society (ACS), an organization created to return U.S.-born former slaves to Africa.  ACS representatives first arrived on the Mesurado River in 1821. The original name of Monrovia was Christopolis. In 1824 it was renamed “Monrovia” after James Monroe, who was the American President at the time as well as a supporter of the American Colonization Society. The indigenous populations of the areas surrounding Monrovia felt that the city was built on stolen land and began attacking it as early as 1822. Those attacks continued sporadically until the mid-nineteenth century.

Monrovia’s first settlers were former Southern slaves. Not surprisingly the early architecture of the city was largely influenced by the style of the Southern antebellum buildings.

Monrovia grew slowly during the rest of the 19th Century.  After the Civil War the American Colonization Society was taken over by emigrationists such as Edward Wilmot Blyden and Bishop Alexander Crummell. They urged post-Civil War African Americans to settle there and many of them did until World War I. These Americo-Liberians, both those in the initial wave of settlement in the 1822-1848 period (Liberia became independent that year), and those who came after the U.S. Civil War, politically and culturally dominated the city.

After World War II growing numbers of indigenous people from the interior of Liberia began migrating to the capital to exploit new job opportunities. Always present in the city back to its founding, by 1950 for the first time, they were the majority of the city’s residents.

In 1980 Sergeant Samuel Doe of the Liberian Army led a coup which toppled the existing government.  For the first time in its history Liberia was controlled by indigenous people rather than Americo-Liberians. Doe ruled autocratically but when he was deposed in 1990, Liberia plunged into political chaos.  The series of civil wars both crippled Monrovia’s economy and brought thousands of people into the capital fleeing the violence. The Civil Wars ended in 2003 when dictator Charles Taylor was deposed.

Today Monrovia is home to Americo-Liberians, indigenous people from the nation’s interior, and now thousands of refugees fleeing from other West African civil wars such as the one in neighboring Sierra Leone. Approximately 85% of the city’s population is Christian and 12% is Muslim.  It is the site of the University of Liberia and three small religious colleges, United Methodist University, African Methodist Episcopal University, and Stella Maris Polytechnic, a Catholic institution.

Monrovia’s economy is based on trade. The port of Monrovia, the largest artificial harbor in West Africa, ships rubber, iron ore, coffee, cocoa, rice, and timber from the Liberian interior to the rest of the world.  Monrovia’s major industry is rubber and palm oil processing, food products, furniture, and chemicals.  These industries, however, employ relatively small numbers of workers. Most residents of Monrovia lack stable employment and 80% of the population lives below the poverty line.

In 2014 Monrovia faced a new crisis as its government had to address the spread of ebola among its most vulnerable citizens.