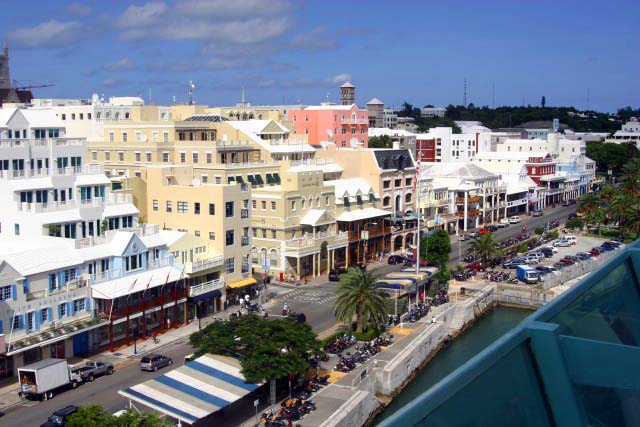 Hamilton is the capital of the British overseas island territory of Bermuda in the Western Atlantic Ocean. The city had a population of 3,641 people in 2014. Hamilton is located on the northern shore of a deep water harbour on the main island of Bermuda. Most of the people who work in Hamilton do not live in the city but commute by bus, car, or ferry. Some 13,500 people, about 40% of Bermuda’s entire working population, are employed in the city. Hamilton is one of the smallest cities in the world since it is only about 180 acres in size. The city is the administrative, commercial, entertainment, and shopping center of the nation of Bermuda and its port serves freighters, ferries, and smaller to medium sized cruise ships.

The history of Hamilton began in 1790 when 140 acres was acquired for a town through a petition from a number of merchants in the Central and Western Parishes of Bermuda. The town was named Hamilton in honor of then British colonial governor Captain Henry Hamilton who had supported the founding of a town in the center of the island that could better serve the needs of the territory’s expanding population at the time.

Hamilton was incorporated by an Act of the British Parliament on June 29, 1793. The city held its first elections in January 1795. On January 23, 1815 Hamilton officially became the capital of Bermuda replacing the historic Town of St. George. Hamilton officially became a city upon the completion of the Anglican Cathedral of the Most Holy Trinity in 1897 to commemorate the Diamond Jubilee of Queen Victoria. In 1923 Hamilton became a municipality in Bermuda under the 1923 Municipalities Act of the Bermuda House of Parliament.  The city’s port was made free (no customs duties) in 1956 to encourage business and employment.

The current Hamilton City Hall was officially opened by Governor Major General Sir Julian Alvery Gascoigne on February 11, 1960 and is located on Church Street in the center of the city. The building has traditional Bermuda architecture and some Scandinavian influence. Within the building are the Bermuda National Gallery, the Bermuda Society of Arts, the Mayor’s Parlour, and the city’s administrative offices. Queen Elizabeth II visited the City Hall along with Prince Philip on February 17, 1975. Other notable people who have visited the hall are The Prince of Wales, Margaret Thatcher, and former United States President Harry S. Truman.

Hamilton’s population in 2010 was 54% black, 31% white, 8% mixed race, and 4% Asian.  Another 3% reported as other races.  An economic backbone of Hamilton is tourism. Tourists and visitors arrive to the town by ocean going vessels that dock along the main street or by air at the terminal located 13 km, or eight miles, northeast.