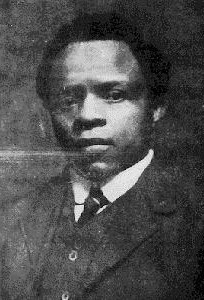 Sol Plaatje, first Secretary-General of the African National Congress (ANC) was born October 9th 1876.  In addition to his political involvements, Plaatje was an interpreter, linguist, journalist and the first black South African novelist. Plaatje was raised in the Pniel mission station of the Lutheran Berlin Mission Society near Barkley West in South Africa, where he received a minimal elementary education.  In 1894 he found work in Kimberley, South Africa as a postman, and in 1889 he married Elizabeth M’belle.  Plaatje spoke English, German, Dutch and several South African dialects.  Due to this facility for languages he found employment in 1899 as an interpreter for the British during the Boer War at the siege of Mafeking.  Plaatje wrote an account of the siege that was discovered in 1969 and published in 1972 as The Boer War Diary of Sol T. Plaatje: An African at Mafeking.

This early writing predated Plaatje’s entry into journalism, which would remain his focus for the next decade of his life. In 1901 he founded the first Setswana-English paper Koranta ea Becoana (Newspaper of the Tswana).  He continued editing the paper until he founded another, Tsala ea Becoana (The Friend of the People).  During this period he was regularly published by the Kimberley paper Diamond Fields Advertiser.

In 1912 Sol Plaatje was voted fist secretary-general of the South African Native National Congress, later to become the African National Congress (ANC).  Two years later, Plaatje was sent as part of the 1914 ANC delegation to London to protest increased restrictions on native rights to own land resulting from the passage of the 1913 Land Act.  Despite the delegation’s lack of success, Plaatje stayed on in London to continue the campaign alone and work as a language assistant at London University. Between 1914 and his return to South Africa in 1917, he wrote Native Life in South Africa, Before and Since the European War and the Boer Rebellion, Sechuana-Proverbs With Literal Translations and Their English Equiv­alents and A Sechuana Reader.  He continued writing throughout his life, completing The Mote and the Beam: An Epic on Sex-Relationship ‘Twixt White and Black in British South Africa in 1921 and a novel titled Mhudi, An Epic of South African Native Life a Hundred Years Ago, in 1930, as well as several translations of Shakespeare plays into Setswana.

In 1919 Plaatje returned to London as head of a second ANC delegation to meet with Prime Minister Lloyd George.  Over the next four years he traveled extensively in Canada and the United States, where he met with leading members of the National Association for the Advancement of Colored People and lectured widely.  Plaatje returned to South Africa in 1923 impoverished after years of travel. He continued his writing and political activism until his death of pneumonia in Johannesburg on June 19th 1932.