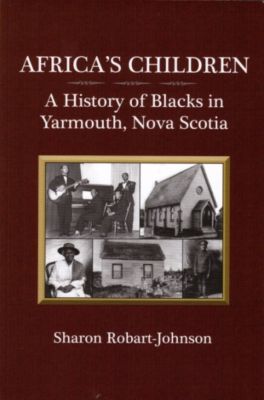 In the account below Nova Scotian historian Sharon Robart-Johnson describes the research and writing that culminated in her book, African’s Children: A History of Blacks in Yarmouth, Nova Scotia. Her book, the first history of Afro-Canadians in Nova Scotia, focuses on her community of Greenville, about two hundred miles southwest of Halifax.

Five years of sorting through historical documents, funeral ledgers, and church records eventually led me to the writing of Africa’s Children. My journey began with a walk through the three cemeteries in the one-time all-black community of Greenville, Yarmouth County, Nova Scotia, looking at and running my gloved hands over the ground, hoping to find indentations of graves from long ago. I wanted to determine exactly how many people were buried in these cemeteries. A portion of the grounds of the Greenville Church Cemetery encircling the small Baptist Church is now used as a parking lot, making it impossible to locate all of the graves. Since the community of Greenville was first settled in 1820 and the earliest burial record dated only in 1891, an accurate number of burials cannot be determined. However, in the three cemeteries combined, to date more than two hundred people have been identified.

The personal information uncovered while identifying the deceased fuelled my need to know more. While perusing local historical documents, I found one that shattered every thought and idea I had of my home town—a quiet, peaceful haven free from ugliness of a troubled past. Not so. Several residents of Yarmouth County owned slaves.

From 1801 court documents comes the information that Jude and Diana, young slave girls, shared a room in the home of their owner, Samuel Andrews of Raynardton, Yarmouth County. Forced to exist on potatoes, fish, and coffee, on occasion Jude would steal bread and cheese from the family pantry and was whipped for her transgressions. Jude’s foray into the Andrew’s pantry on the night of  December 27, 1800 after all were asleep would be her last. Two of Samuel’s sons began hunting for her the next morning. Upon finding her they proceeded to beat her with large sticks inflicting deep wounds that bled profusely. Eventually, she was carried into the house and laid in front of the open fireplace where several of the cinders seared her flesh. Several agonizing hours later, she succumbed from her injuries. In time the Andrews were arrested and tried for her murder. As damning as the evidence was, they were acquitted and freed from jail.

There was more.  I found a “Bill of Sale for a Negro Boy Jack” at the Yarmouth County Museum and Archives that was dated the twenty-third day of December 1801.  The document described  “…a certain Negro boy named Jack, about seven years of age, born in my house from a wench and a man, both my property.”  The bill of sale said that he was sold for thirty-nine pounds or approximately one hundred and fifty-nine dollars. These people were not the only slaves in Yarmouth County that I discovered during my research.  Nor did the brutality of this Canadian version of slavery stop with the murder of Jude.

After examining courthouse records I discovered that whippings of slaves for petty crimes were common in Yarmouth County. In 1809 several men found stealing food and a keg of rum received punishments that ranged from twelve to thirty-nine lashes. In 1810 a thirteen-year-old girl, accused and found guilty of stealing a piece of ribbon, received twelve lashes on her bare back.

I grew up in Yarmouth without knowing this local history of slavery.  I suspect few other people knew.  My mission became clear.  I needed to bring to the forefront as many of the stories as I could find.

More shocking stories surfaced as I interviewed senior citizens in my community.  They had to confront the legacy of local slavery, racial discrimination.  They recalled having to sit in the balcony of the local movie theatre because they were not allowed in the main-floor area. The seniors also told of a curfew that was in place as late as the 1930s that forbade blacks from a certain area of the town after six in the evening. Some local business owners also had refused blacks entry into their establishments.  These revelations made me question Canada’s often stated commitment to racial equality.  Canadians, for example, proudly tell of our nation being the destination for black women, men, and children who fled 19th Century U.S. slavery.

Although I now knew the experiences of some of the Yarmouth blacks, I still did not know where they had come from or how and when they arrived in my community.  I discovered that some were Black Loyalists who had made the journey from New York to Port Roseway (Shelburne), Nova Scotia in 1783. Approximately 2,754 Blacks, some free and some still enslaved, lived between Birchtown, Shelburne County, and the town of Shelburne. Eventually, some made their way to Yarmouth to settle, hoping for a better life.

Several slaves, however, came to Yarmouth with their masters from other colonies before the Black Loyalists arrived.  Andrew Lovitt brought slaves from Beverly, Massachusetts, in 1765; James Lent brought William Berry from New York; Jesse Gray migrated from St. Augustine, Florida to Yarmouth with his slave, Mary Postell.  The county’s largest local slaveowner, Colonel Ranald McKinnon (MacKinnon), arrived in Nova Scotia from Scotland in 1766.  He settled in Glenwood in what is known today as the Municipality of Argyle bringing with him “many slaves” according to local records, to work on his farm. Between 1798 and 1828, his son, Major John McKinnon, imported two hundred slaves to clear rocks from his land and build massive stone walls, five feet high and six feet across the top. These stone walls are still visible today.  I marvelled at how this could have happened in Yarmouth County at a time when other fugitive slaves were making their way to freedom in Canada on the Underground Railroad.

It was at that moment I decided the world should know these stories. I was not sure how I would accomplish this; I only knew that I would. At the insistence of my late sister, Rose Robart, Africa’s Children, A History Of Blacks In Yarmouth, Nova Scotia was born.  I felt Africa’s Children was the best title since all of Yarmouth’s blacks were descendants of the slaves who were stolen from their homeland, Africa.   I have placed in chapter 1 the poem, Jude, that Rose wrote as a tribute to the young slave who died in 1800 before she could truly live and enjoy her life.

Very little is known about the early history of Yarmouth’s first all-black community, Greenville, with its segregated one-room school.  The first settler was a man named David Dize. Black Loyalists and the descendants of other freed slaves soon followed him. These pioneers built crude log cabins with rags covering the glassless windows.  By 1839 Greenville had 164 residents.

The Greenville school remained segregated until 1905 when Harvey Jeffrey, a white man, became a trustee of the school after enrolling three of his children there.  By 1960 the population peaked at slightly over 300.  Since then the numbers have steadily dwindled as the young people left in search of educational or work opportunities.  Today there are fewer than seventy-five people still in residence.

There was one African Methodist Episcopal (AME) church and two United Baptist churches in Yarmouth County. The AME ministers traveled the circuit and arrived in the county at different times from the United States but the United Baptist ministers were from Nova Scotia.  Other Afro-Canadians enlisted in Canada’s No. 2 Construction Battalion (The Black Battalion) during World War I. Yarmouth also had murders, mysterious disappearances, and unexplained deaths of blacks, some still unsolved to this day. Even in death they did not escape bigotry. In the surviving funeral ledgers, the “N” word was often written next to the deceased and the ministers who officiated at the funerals.

Sports in Yarmouth, however, played a key role in boosting the self-esteem and morale of many local blacks.  Local sports stars include “Kid” Sammy Thompson and Eugene “KO” Fowler in boxing, and Russell Cromwell and Freeman Berry in baseball.

Also several of Yarmouth’s young people of African ancestry embraced education as a way to challenge racist attitudes.  They succeeded in closing the gap that has long existed between more educated whites and less educated people of colour. Yarmouth can boast, Ernest Bruce Johnson, the first Black Nova Scotian to graduate from the Dalhousie University School of Pharmacy, who today is co-owner of his own drugstore and Clarence Limeon Bodden, the first black Nova Scotian to join the Royal Canadian Mounted Police (RCMP).

Africa’s Children also shows the connection between Black Canadians and African Americans. It tells the stories of these early settlers who came here from the United States both before and after the American Revolution.  Thus through both slavery and freedom the histories of Afro-Canadians and African Americans are intertwined.  Children of Africa, their stories continued in the United States and ended in Yarmouth, Nova Scotia.