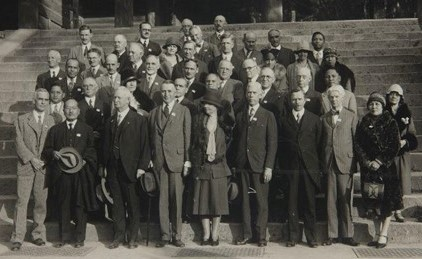 In the account below historian Amy Sommers describes the diplomatic work of James Weldon Johnson at the Institute of Pacific Relations Conference in Kyoto, Japan in 1929.

If one were to imagine a modern renaissance man of such imposing and broad talents as to be almost mythic, James Weldon Johnson would surely fit the bill. Today Johnson is primarily remembered as the author of the lyrics to ‘Lift Ev’ry Voice and Sing,’ often called the “Black National Anthem.” However, in addition to his talents as a lyricist, he excelled over a long career in a stunning range of fields, often involving ‘firsts’: education (first Black professor at New York University), law (the first Black person admitted to the Florida Bar), diplomacy (serving the Roosevelt and Taft administrations as consul in Venezuela and Nicaragua), civil rights leadership (as the first Black person to serve as Executive Secretary for the National Association for the Advancement of Colored People, the ‘NAACP’), and as a noted Harlem Renaissance writer, poet and editor.

Johnson’s impeccable record of accomplishment would prove vital when it came time in 1929 for the American arm of the Institute of Pacific Relations (IPR) to assemble its delegation for the IPR’s biannual conference. The IPR, formed in 1925 in Honolulu, Hawaii, aimed to provide a Pacific-centric perspective on international affairs, and to foster collaboration and understanding on issues of common concern around the Asia Pacific region. The organization was non-governmental, but implicit in its existence was the possibility of influencing national policy through the participation of respected voices from the United States, Japan, China, Canada, Great Britain, Australia, and New Zealand.

In the wake of World War I, ending the imperialism practiced by predominantly White nations (European, and more recently, the United States) was an important aim for many countries in Asia. There, the experience of Black Americans in confronting White supremacy was seen as a relevant point of comparison for Asian societies seeking to address the ills of White colonialism.

In 1927, the IPR’s Japanese council specifically requested that a ‘Negro of distinction’ participate in the second IPR conference hosted in Honolulu. The American delegate committee pondered this request. By including a Black American (and by implication, opening the door to discussing White-Black relations in America), they feared Asian participants would conclude that American practices involving Black citizens offered evidence of how White Americans viewed White-Asian engagement. The White members of the American committee also believed that Black Americans had nothing to contribute to policy discussions involving Asia. In light of these considerations, no Black American participated in the 1927 conference.

The 1929 conference was to be held in Kyoto and to focus on the theme “the peoples of the Pacific have become the captains of their own destinies.” With the conference located in Japan, honoring the host’s desire for Black participation won out over earlier American reservations. Johnson was invited as the sole Black American in a delegation of 45. American IPR leaders may have been ambivalent about his inclusion, but even before he disembarked from the ship that had borne him to the shores of Japan, he was inundated by Japanese reporters eager to obtain his views on a range of issues. The reporters allowed on board peppered Johnson with questions about the NAACP and its aims, the future of Black Americans, would they become Communists, would they assimilate with white Americans, did he plan to bring up the question of Black people at the IPR conference? Johnson wrote in his memoir, Along This Way, of his surprise at how familiar Japanese reporters were with the NAACP and issues facing Black Americans.

Japan’s media continued to cover Johnson prominently while he was in the country, presenting him as a ‘world figure’ known for commitment to ‘the emancipation of the non-white races of the world.’ People followed him like a celebrity on the streets of Tokyo, and he was accorded the honor of an invitation to a garden party hosted by Japanese Emperor Hirohito. A Japanese official informed Johnson and the other foreign guests that up to that time, less than 200 foreigners had ever been accorded the honor of attending such a social gathering with a Japanese Emperor.

As to the conference proceedings themselves, Johnson’s observations are most interesting. He noted ‘ostrich-like behavior’ by the participants, both as to Asian-Western issues of conflict or difference, and as between Japanese and Chinese delegates on sensitive issues (this was at a time when Japan was asserting a right to interfere in Northeastern China, but had not yet exerted military control). Discussion in Kyoto shied away from making explicit the racial underpinnings for certain policy differences.

“It was also the technique of the Japanese and Chinese in the occidental-oriental questions,” he later wrote, “not only not to mention racial differences, but for the purposes of discussion, to ignore completely their existence (emphasis added). I knew, and I am sure every member of the Japanese and Chinese groups, as well as of the American, British, Canadian, Australian, and New Zealand groups, knew that back of all the economic arguments for the Oriental Exclusion Act passed by the United States were reasons based on differences of race and color.”

Johnson concluded that he was not satisfied that ‘this studied ignoring of a factor so basic to every question being considered’ was the wisest policy.

Johnson’s experience with the IPR’s Kyoto conference offers a prism highlighting a variety of contradictions present in the interwar approach to addressing international policy concerns, not least in Johnson himself. White American leadership in the IPR sought to increase American influence in Asia by showing America as having common cause with Asian nations. Yet, the American IPR arm was deeply reluctant to enter into a discussion of shared concerns between what was then referred to as the ‘darker races’ in Asia and Black citizens in the United States.

Japanese desire in a post-World War I world to align with, and find inspiration from, Black Americans’ struggle for autonomy and opportunity in the face of White domination expressed itself in a range of endeavors. Yet when offered the chance to hear from an eminently qualified Black American, possessing extensive experience both in international diplomacy and American civil rights activism, the organizers of the Kyoto conference shied away from encouraging Johnson to speak to the racial problems percolating below policy issues under consideration.

Johnson also presents a contradiction: in his work as a U.S. diplomat, he has been criticized for supporting American military intervention in Nicaragua, yet in Along This Way, he does not address his own actions in perpetuating colonial oppression.

On the question of whether race is central to understanding policy problems, Johnson wrote, “Out of it all [the conference discussions], the truth that came home most directly to me was the universality of the race and color problem. Negroes in the United States are prone, and naturally, to believe that their problem is the problem. The fact is, there is a race and color problem wherever the white man deals with darker races (emphasis added).”

In his memoir, Johnson expresses his dissatisfaction with the ‘ostrich-like behavior’ he witnessed at the Kyoto conference, yet he did not challenge the wisdom of that course at the time. Did preservation of the personal esteem with which he was regarded take priority over using his credibility to push for a candid discussion? Was Johnson being pragmatic in recognizing that if he alone insisted on exploring a topic others shied away from, it would go nowhere? Or, after decades of endeavor pursuing positive change in the face of White resistance, through artistic expression, personal accomplishments, education and civic rights work, had Johnson concluded his best chance at influence lay in his personal engagement as an urbane and erudite internationalist? Johnson does not tell us his motivation.

Within two years, Japan would invade Manchuria and establish the kingdom of “Manchukuo,” with the former Emperor of China installed as its head of state. By the time the League of Nations issued a formal report in 1933 denouncing Japan’s actions, Japan would be firmly ensconced in Northeastern China. Rather than withdrawing from Manchuria, Japan withdrew from the League. Perhaps the delegates at the IPR should have broached the racial differences so studiously ignored in Kyoto in 1929. Yet, given the momentum behind Japan’s pursuit of an Asia-originating form of imperialism, the reality was that the arguments of non-governmental representatives, no matter how erudite, were not going to reverse Japan’s trajectory towards hegemony.

Today, Johnson’s participation in the IPR’s Kyoto conference is perhaps most significant as an expression of Black Internationalism pre-World War II: that the viewpoints and experiences of African Americans and of people of color in other parts of the world held some relevance to one another; an assertion that African Americans possessed insights relevant to not only domestic concerns, but international policy as well; and that Black American men and women from a range of fields, through their research, personal experience and professional qualifications, possessed standing to engage meaningfully on international issues, regardless of whether that potential was recognized by their White American contemporaries.

An anecdote from Along This Way illustrates the ways in which Johnson’s ease in cross-cultural settings was a powerful expression of what a Black person could be, at a time of almost universal skepticism of Black people’s potential. Prior to the conference’s conclusion, Edouard Lavergne, France’s observer, related to Johnson that James McDonald, Chairman of the Board of the Foreign Policy Association had asked Lavergne how well Johnson spoke French. Both Lavergne and Johnson were puzzled why McDonald would make such an inquiry. Subsequently, McDonald and John D. Rockefeller III revealed to Johnson they were planning a French table for the voyage back to the United States. Only French would be spoken and a fine of ten cents imposed for any lapse into English, thus the need to ensure sufficient skill to undertake the challenge. A native French speaker made up the fourth person at the on-board “French table.”

Johnson reported the experiment as a great success, saying “we did talk constantly and on a great many subjects.” He never lapsed into English, and so was never fined! Interestingly, his French and American tablemates did want to discuss American race issues: “Several times we discussed the American race question.” So, while Johnson had arrived at the Kyoto Conference ready, and eminently able, to bring his expertise to bear on the question of how race influences public policy, it was only outside of the Conference proceedings that he actually had an opportunity to do so. This was such a loss to the United States and to the world.