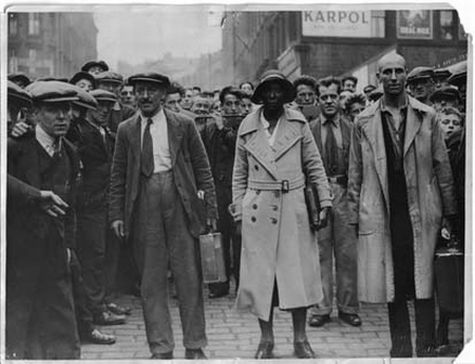 In the following account writer Irene Brown recalls through her father’s photo the visit of Ada Wright, mother to Roy and Andy Wright, two of the nine Scottsboro Boys accused of rape in 1931.  Her account appears below.

Memories.  That’s all that’s left when someone dies.  I am lucky.  My parents left me good memories and they also left me hundreds of photographs.  One day, I came across a photo of my Dad’s that I must have seen before but somehow its significance had failed to register.  It was a press photo with the stamp ‘copyright The Bulletin,’ which was a sister paper of the Glasgow Herald, one of Scotland’s national newspapers.  It looked like the start of a demonstration which I assumed was in Glasgow as the photo had been taken by a Glasgow newspaper.  The crowd was made up of flat-capped working class men and bareheaded boys.  Two young men near the front were playing flutes.   One of these young men was my father, Duncan Brown.

The demonstration was led by three figures, two men, both carrying valises, and one woman.  A black woman.  She was dressed respectably in a white blouse under a light coloured double breasted belted coat with large lapels, a brimmed hat, and lacing shoes.  Under her right hand she carried what was either a clutch bag or a portfolio of papers.  She looked solemn, dignified, and significant.  This photo looked like it was taken in the 1930s.  Women had only recently gained suffrage so she must have been an important black woman to have such a prominent place at such a big rally—but who was she?  Why had I never noticed her before?  Why had I never thought to ask my Dad about her?  Seventeen years after my Dad’s death, I decided to find out.

Armed with the old Bulletin photo, I went to Glasgow’s Mitchell Library to check their archives but with no date, I was groping in the dark.  The 1930s was the time of various Hunger Marches in Britain organised by the National Unemployed Workers’ Movement.  I checked the Working Class Movement Library website which gave several dates when they took place which were helpful in my search.  I then came across another photo of my Dad’s, this time of the Springburn Workers’ Flute Band in their uniform taken in May 1938.  My Dad had written on the back “This band was formed round about 1932 and formed by Davie McLeod & Dave McBride and led by Harry King.” I recognised the leader, Harry King, as also being in the Bulletin photo.  Maybe the gathering with the mysterious black woman was one of the first outings of the fledgling Springburn Workers’ Flute Band?

I had checked the Internet with key words like ‘black woman leader,’ ‘Afro Caribbean or Afro American woman 1930s Glasgow,’ ‘Hunger March woman leader’ all to no avail.  I thought of every possible source I could – links to the Left, academics with an Afro Caribbean or Afro American interests, Glasgow Left wing organisations, dedicated Left libraries, even a television programme.  As before, folk were curious but could not help.

By chance I contacted Chris Harvie, a Scottish historian and Member of the Scottish Parliament, who in turn suggested I contact Neil Evans of the Welsh Peoples History Society.  He led me to Marika Sherwood from the British and Asian Studies Association who circulated the photo among its members.  One of them, Sean Creighton, recognised the black woman in the Bulletin photo. He had remembered her clothes from another photo of the time and suggested I Google ‘Ada Wright and Scottsboro’.  I did.  It was she!

Scottsboro.  I had never heard of this before.  When I Googled the name, I found Ada Wright featured on the cover of a book by American academic, Susan D. Pennybacker, called From Scottsboro to Munich: Race and Political Culture in 1930s Britain.  I learned that in March 1931, nine black youths were arrested at a place called Paint Rock, Alabama, and accused of the rape of two young white women on board a train from Chattanooga, Tennessee, a charge that was subsequently withdrawn by one of the women.  The youths were quickly tried in the nearby town of Scottsboro, pronounced guilty, and sentenced to death.  Two of the defendants, Roy and Andy, were the sons of Ada Wright.

The injustice of the case made it a cause célèbre and the American and British Left (The International Labour Defence) persuaded her to undertake a European tour to appeal for her sons’ lives.  This was an astonishing undertaking on many levels. The journey itself was long and her schedule was relentless. Ada Wright, known as Mother Wright, was a poorly educated Southern black woman who had not been politically active.  Nonetheless, she undertook the fervent campaign for the love of her two boys.  I have often wondered about the realities of her very foreign experience—did comrades’ hospitality give her food, rest and laundry?  As far as I can gather, much of the minutiae of receipts and records of this very human part of her journey are lost.

We do have, however, brief newspaper accounts of Mother Wright’s visit to Glasgow.  On July 5, 1932, the Glasgow Herald reported that Wright arrived by train at the city’s Queen Street Station on July 4, where she was met by a large number of unemployed men.  She proceeded to Springburn at the head of that procession accompanied by the flute band that included my father.  On the evening of July 4, she addressed three well-attended open air meetings at Springburn, Gorbals, and Bridgetown, all neighbourhoods in the city. At each of these meetings resolutions were passed urging the release of her boys, Roy and Andy.  According to this newspaper account Wright remained in the city for fewer than 24 hours.  She left on July 5 for Manchester.

The Daily Worker on July 7, 1932, published The Bulletin photo and described her arrival in Manchester.  According to the article, Wright was given “the same splendid reception” that greeted her in Glasgow.  She was met at the Manchester station by workers with banners and posters which read “Stop the Legal Lynching,” she was introduced by local labour leader, Len Wincott.  Later that evening she spoke to an overflow audience at All Saints Hall and then to another group at the gates of Alexander Park.  The Daily Worker noted that a collection was taken for the Scottsboro Boys’ legal fees and the International Labour Defence, the group sponsoring Wright’s trip, recruited new members because of her speeches.

Wright was scheduled to speak in Dublin, Ireland after her Manchester visit but she never arrived in the city.  She was banned from the country by Irish Prime Minister Eamon de Valera.  She had been welcomed in Scotland, visiting Kirkcaldy and Lockerbie as well as Glasgow while in Scotland during her 10 day stay in Britain.

All this was done by a 42-year-old widow who had been a domestic servant in her home town of Chattanooga, and who travelled little in the United States, much less undertaking a voyage abroad, and who had no real experience in public speaking.  The campaign was a success in as much as the Scottsboro Boys were spared execution but Ada’s youngest son, Roy, served 6 years in prison and Andy was not released until 1950.

My two year quest to find the identity of Ada Wright is a miniscule part of a much bigger and highly significant, if not entirely happy, story.  In doing so, I hope to shine a small light into a corner of working class history.  This is the story of one mother’s brave and determined fight against injustice and her willingness to put herself on an international public stage to speak on their behalf with no language other than her own native Tennessee dialect in foreign countries.  It is also a story linked to wider and bigger political and racial issues in the decade leading up to World War II.  I find it touching that a poor woman from a railway town in Tennessee was so warmly welcomed by the poor people in a railway town in Scotland—Springburn, Glasgow.

My father had 46 years of service with the Railway at St. Rollox Works, Springburn, Glasgow.  Like many others during the Depression, he was made redundant on March 1931, the same month that the Scottsboro boys were arrested.  Like most other ordinary folk, his history was not recorded.  He was not a major player on life’s stage, but at age 24 he witnessed a significant piece of history.  He and the rest of the band played a tune, silent to us now, for the arrival of Ada Wright in Glasgow.  Ada was an ordinary working woman in Alabama but with her purposeful feet planted firmly on a Glasgow Street, she was a strong presence that day in the summer of 1932.  She should not be forgotten.

*A longer version of this article appeared in History Scotland,  Vol. 11 (July/August 2011), p. 50.  This article has been displayed at the Scottsboro Museum in Alabama.