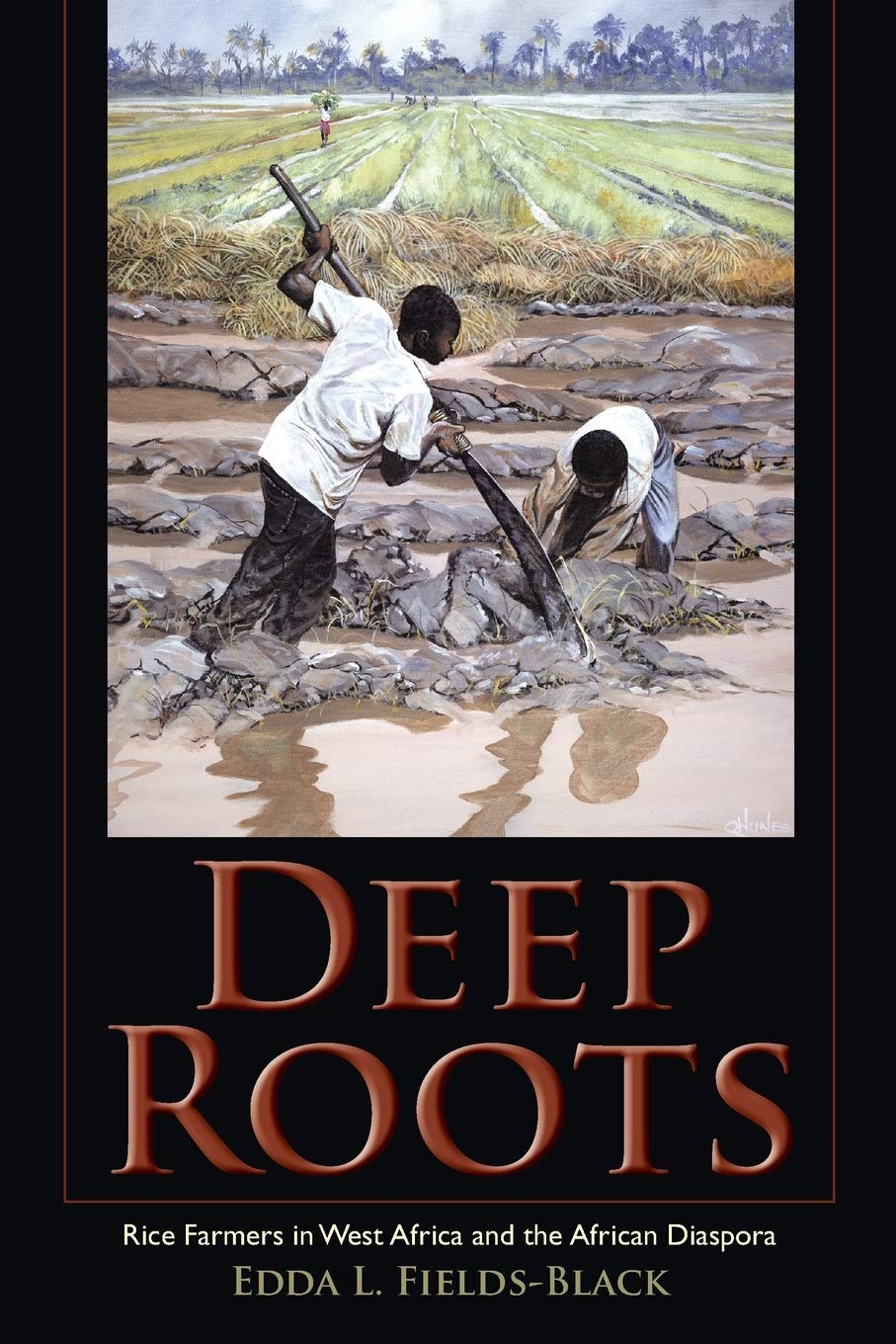 Carnegie Mellon University historian Edda L. Fields Black’s 2008 book, Deep Roots: Rice Farmers in West Africa and the African Diaspora, opened a vast new area of diasporic study by linking the cultivation of rice in Africa to the rise of this crucially important food crop in Colonial South Carolina.  What follows is a description of her work and the personal journey that led to that scholarly project.

I grew up in Miami, Florida immersed in Caribbean and Latin American culture with two Gullah-speaking paternal grandparents.  My father’s nuclear family had moved to Miami from Green Pond, South Carolina when he was in elementary school.  As a child, I remember being aware of the difference between my grandparents’ accents and the West Indian accents that were so familiar to me in southern Florida.  Their speech was akin to West Indian immigrants, of which my mother’s family in particular and Miami in general had many.

When I was in grade school, our family began taking my grandmother to Green Pond every summer to visit our relations who still lived in Green Pond, Whitehall, and Over Swamp.  My mother’s historical and genealogical research about my father’s family in preparation for and during our family summer vacations was my first inkling of Gullah as both a rich language and culture with its own peculiar history.  It also ignited a thirst in me which could not be quenched in a summer vacation.  More than anything, I wanted to speak Gullah, a language which my father understood but did not speak (at least not to my knowledge), and therefore could not pass down to me.  As the first generation to be born and raised outside of the Low country, I did not want to be the link which broke the chain of transmission.

In hindsight, I chose to study rice farmers and to travel to West Africa’s Rice Coast region, so that I could live and work as my paternal great-grandparents had lived on plantations in Beaufort and Colleton counties, South Carolina.  By the time that I began traveling to Sierra Leone and Guinea, learning to speak Krio and to plant rice, my great-grandmother suffered from dementia.  She spent most of her days in a rocking chair at her daughter, my great aunt’s, home in Miami.  Sometimes, she bent over reached towards the ground with her hands, held her fingers together, and pushed them towards the ground.  After spending the rainy season planting rice with women’s associations bending over in the swamps and pushing rice seedlings into the moist earth, I surmised that she was pantomiming actions that were part of her daily life as a younger woman.  She was planting rice.

My desire to speak my paternal language propelled me to travel first to Sierra Leone in 1992 as an undergraduate where I set out to learn Krio in order to communicate with my great-grandmother in her own language—or at least as close to it as I could come.  In 1996, as I conducted pre-dissertation research in Sierra Leone and the Republic of Guinea, the war engulfed much of the southern rice-growing regions, as well as the capital city of Freetown.  I was forced to evacuate—almost literally—to the Guinea, where Deep Roots was born.

Deep Roots: Rice Farmers in West Africa and the African Diaspora is set in the coastal Rio Nunez region of Guinea, which is inhabited by the Baga and the Nalu ethnic groups.  Several of the Baga languages are closely related to the Temne language spoken in Sierra Leone.  For hundreds of years, the Rio Nunez region has been a major rice-producing region.  The Baga in particular gained the reputation among Portuguese traders who were the first Europeans to visit this area of West Africa as “quintessential rice farmers”.  The “West African Rice Coast” refers to the West African region that spans from the lower Casamance River in present-day Senegal to present-day Sierra Leone.

The Rio Nunez region holds special significance to the South Carolina and Georgia Lowcountry.  In 1793-4, a slave trader by the name of Samuel Gamble quite literally got “stuck in the mud” in this region of coastal Guinea for several months.  Gamble was the first European to visit coastal villages, record a detailed description of the tidal rice-growing technologies used by the inhabitants, and to even make a sketch of a rice field.  After analyzing the sketch, geographer Judith Carney and botanist Richard Porcher have concluded that it is almost identical to tidewater rice-growing techniques used on South Carolina rice plantations at approximately the same time period.

Gamble’s account frames the three main questions underlying the book:  First, how do historians reconstruct pre-colonial African history without written sources or oral traditions?  Second, just how ancient is rice production, particularly tidal rice production in one important corner, the Rio Nunez region, of the West African Rice Coast region?  Third, how did the regions’ inhabitants develop their rice cultivation techniques, their indigenous knowledge system?  This question is important for periods of the entire continent’s history, which pre-date written sources as well for the African Diaspora in which people of African descent have left relatively few documents written in our own hands.

These questions are critical to establishing a connection between West Africa and the South Carolina and Georgia Lowcountry.  Scholars, such as Judith Carney, Daniel Littlefield, and Peter Wood—though there are still a few who remain unconvinced—agree that aspects of the rice-growing techniques practiced on South Carolina and Georgia rice plantations were influenced by West Africa.  As scholars, we cannot continue to claim that they are “African” without providing evidence of how, when, and by whom they developed in West Africa.

Providing this evidence was easier said than done.  For good reason, Samuel Gamble recorded the first written description of rice farming for coastal Guinea.  The Rio Nunez region was an isolated, unhealthy, unfriendly (to outsiders), and infrequently traveled section of the coast.  In addition, the kinds of written sources on which historians usually rely were simply non-existent for the region.  The paucity of traditional historical sources inspired, i.e. drove, me to take an innovative approach.

Deep Roots
utilizes the comparative method of historical linguistics to reveal the antiquity of coastal dwellers’ land use systems and agricultural technology.  The comparative method of historical linguistics has been used by historians of South, East, and Central Africa to reconstruct the history of Bantu speech communities.  It enables a historian to analyze words and their morphology and regular sound correspondences as historical sources.

I collected thousands of words related to rice cultivation and the coastal environment through participant observation and fieldwork—and I mean this literally—working alongside farmers in the Rio Nunez region under either blazing sun or blinding rain, standing in stagnant water sometimes up to my knees with my lower back bent at a most unnatural angle, and removing blood sucking leeches from my and my fellow female farmers’ legs as the conditions necessitated.   I will not and cannot begin to describe the mosquitoes!  This is the first study to employ the comparative method to Atlantic languages in coastal West Africa.  Deep Roots also incorporates biological and botanical studies on mangrove ecosystems and coastal land-use change whose employ is unique to the historical linguistics literature.

The combination of these two independent streams of evidence makes a unique contribution to an innovative body of historical research.  The interdisciplinary sources revealed that the development of a coastal land-use system is much more ancient than rice cultivation, the first stage dating back to c.3000 to 2000 BCE.  In the Rio Nunez region, agricultural innovations, which constitute what I call the “coastal rice knowledge system,” were the result of collaboration between two language groups and date back to c. 500 to 1000 CE.  Extending the coastal rice knowledge system into zones of red mangroves required iron-edged tools to uproot and clear the tangled and twisted aerial roots of red mangrove trees, which Rio Nunez region inhabitants acquired from their neighbors in the savanna-woodland region c. 1500 CE.  In summary, in the Rio Nunez region, tidal rice farming is not only indigenous, but it was developed by the earliest settlers who have inhabited the coast for thousands of years.

Lastly, the book ends on the opposite of the Atlantic, in coastal South Carolina and Georgia which so much resembled the rice fields described by Samuel Gamble.  It analyzes the sale of rice which was used as provisions on slaving vessels and of captives both from West Africa’s Rice Coast region.  Using the Trans-Atlantic Slave Trade database, which compiles the documentation for some 37,000 slaving voyages, Deep Roots argues that the West African Rice Coast region, of which coastal Guinea is an important part, was the single region of origin for the majority of captives who disembarked in South Carolina and Georgia during the evolution of the colonies’ commercial rice industries.