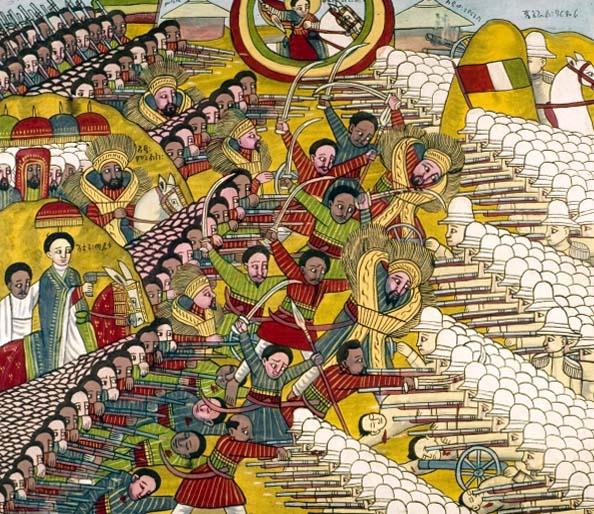 In March, 1896, Ethiopian forces under the leadership of Emperor Menelik II surprised the world by defeating an Italian Army sent to conquer the Empire.  In the following article Raymond Jonas, the Giovanni and Amne Costigan Professor of History at the University of Washington, explores that victory at Adwa.  His article is drawn from his recent book, The Battle of Adwa: African Victory in the Age of Empire.

The battle of Adwa of  on March 1, 1896 was a stunning victory for Ethiopia but a rout and a disaster for Italy.  Adwa – the story of Africans seeing to their own freedom – played out against a background of almost unrelenting European expansion into Africa.  The success of Ethiopia’s forces assured that Ethiopia would be the only African country to successfully to resist European colonization during the Scramble for Africa in the late 19th and early 20th centuries.  It also resonated powerfully in post-Emancipation America where hierarchies of race and ethnicity were only beginning a process of challenge and renegotiation.

Italian interest in East Africa dates from 1869, when the opening of the Suez Canal transformed the commercial and strategic significance of the Red Sea coast.  An official Italian presence didn’t begin until they established themselves at the Red Sea port of Massawa in 1885, after which the Italians began to move up into what are now the Eritrean highlands.  Ethiopian commanders sought to halt the Italian advance, with some notable successes, but the Italians artfully played on rivalries among Ethiopian leaders.  By 1890, the Italians had secured control over a significant territory west and south of Massawa; they announced the creation of the colony of Eritrea, with a capital at Asmara.

The Italians continued to push westward, into the Sudan, and southward, toward the northern Ethiopian province of Tigray.  In late 1894 Ras Mangasha, the ruler of Tigray, used the pretext of war against the Dervishes to mobilize forces to resist Italian incursions.  In a series of victories in early 1895, the Italians defeated Mangasha’s forces.  They pursued Mangasha deep into northern Ethiopia, establishing fortified positions in Tigray and Agamay provinces – vastly expanding the territory under Italian control.

The population of Tigray and Agamay appeared, for a time, to accept Italian rule.  Back in Rome, the Italian commander Oreste Baratieri was feted as an Italian hero.

In September of 1895, Menelik, king of the southern province of Shoa, called the population of Ethiopia to arms.  He began to lead a massive force of some 100,000 men northward toward the Italian-occupied territories.  Through late 1895 and into the early months of 1896, Menelik led a brilliant campaign that forced the overextended Italians to fight on his terms.  By threatening to outflank the Italian forces and threaten Eritrea, Menelik maneuvered the Italians into a position that left their supply lines exposed, vulnerable to a population that was now turning against the occupiers.

General Baratieri was reluctant to attack Menelik’s army in the open field.  Recognizing that he had been outmaneuvered, he believed that tactical retreat was his best option.  Some of Baratieri’s officers argued forcefully against retreat, citing spy reports to the effect that Menelik’s forces were demoralized and depleted.  Baratieri agreed to a plan that called for his army of some 15,000 to advance under cover of night and occupy forward positions, a move that would have forced Menelik to lose face if he declined to attack Italian forces holding strong defensive positions.

The advance took place at night on the 29th of February.  By dawn, the Italians were to have been securely established in the Ethiopian passes, inviting attack.  Instead, one Italian brigade overshot its rendezvous point and virtually marched into the Ethiopian camp.  A second Italian brigade sent to cover the retreat of the first got caught up in a separate engagement.  Menelik’s forces were able to defeat these brigades and the main Italian force in three separate combats.  By the afternoon of  March 1, 1896, Italian forces were in a desperate, panicked retreat back toward Eritrea.

Victory at Adwa sealed the unification of Ethiopia and solidified Menelik’s claim to the title of Emperor.  Europeans and European-Americans interpreted the story of Adwa in different ways.  For some, it was an opportunity to discredit Italy militarily.  For others, it was important to advance the view that the Ethiopians were not black, thus explaining away the significance of white and European defeat.

Ethiopian victory secured independence until Italian dictator Benito Mussolini again attempted to conquer the nation when he invaded it in 1935, initiating what would be known as the Second Italo-Abyssinian War.  Ethiopia initially resisted the Italians alone except with the help of anti-fascist volunteers from the United States and other nations.  By 1940, however, when Italy declared war on Great Britain, its forces joined the Ethiopians in forcing them out of Ethiopia in 1941. The Battle of Adwa and the subsequent Ethiopian resistance to foreign conquest assured that nation’s status as a beacon of liberty throughout the African Diaspora.