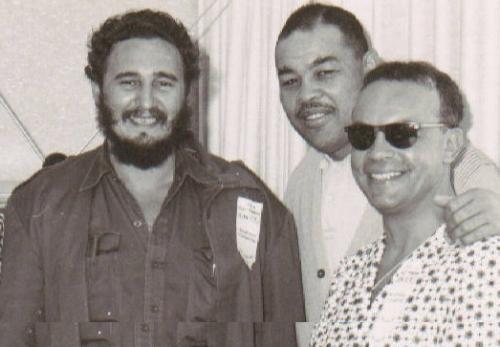 In the article below University of California, Riverside historian Ralph Crowder describes this fascinating but little known attempt by Joe Louis and Fidel Castro to encourage middle class African American tourism to Cuba  in the first year of the new regime.

When Fidel Castro successfully toppled Fulgencio Batista’s regime in January 1959, he and his fellow Cuban revolutionaries closed the gambling casinos and forced American gangsters to leave the island.  This action was enthusiastically supported by working-class and peasant Cubans since the casino world was one of the best examples of American imperialism and the prostitution of Cuban women who staffed brothels financed and managed by foreign gangsters. Castro and his advisers quickly realized that this popular initiative created serious economic problems for Cuba’s tourist industry.   Large hotels stood empty, jobs that supported Cuban households disappeared, and the island nation lost a $60 million dollar industry that could have been used to reconstruct Cuba’s economic infrastructure.

Nearly ten months after Castro’s government had consolidated power, unrest had become widespread.  Unemployment, a persistent problem in Cuba, had been exacerbated by the discharge of soldiers and former civil servants associated with Batista’s rule, and dislocations of landowners and businessmen. Nonetheless, Castro’s personal popularity remained high and the “overwhelming majority of Cubans continued to support Fidel Castro and his regime.”  One strategy that Castro employed in the early years of Cuba’s post revolutionary government was to take personal supervision of new ventures.  This enlarged his personal powers and involved him directly in the administration of all new government programs. As president of the National Tourist Institute, Castro launched a campaign to revive Cuba’s tourist industry.

During the spring of 1959, Castro contacted former boxing champion Joe Louis through Rowe-Louis-Fischer-Lockhart, Inc., an advertising firm based in New York City.  Joe Louis and Billy Rowe, a former columnist with the Pittsburgh Courier, had been long-time friends and partners in this advertising business since 1935.  The former heavy weight champion helped Rowe recruit clients, made commercial appearances, and participated in social and promotional events arranged by wealthy businessmen who wanted to bask in the fame and national prominence of the Brown Bomber.

Castro, who witnessed the glory years of Louis’s boxing career as a Cuban youth in the 1930s, also admired Louis’s athletic achievements and his struggle against overwhelming disadvantages as the son of an Alabama sharecropper and great grandson of a slave.  The accomplishments of the former boxing champion captured the imagination of African America, elevated the Brown Bomber to the status of the first black hero in white America, and made Joe Louis an international celebrity among colonial subjects who had battled the ravages of American and European imperialism.  The Cuban leader also understood that Joe Louis could provide the first serious link with middle-class African Americans.  They had tourist dollars to spend but were prohibited by “Jim Crow” restrictions that were standard problems for African American travelers throughout resort venues in the Caribbean.

Louis eventually assembled an impressive delegation of seventy-one prominent leaders, personalities, and newspaper editors who were all well-known throughout black America.  Noted members of this delegation included: John H. Sengstacke, Sr., publisher and general editor of the Chicago Daily Defender, the largest black owned daily in the world, and co-founder and past president of the National Negro Publishers Association; Attorney Loren Miller, the editor-publisher and legal counsel for the California Eagle; and Carl Murphy, editor and publisher of the Baltimore Afro-American.  Other participants represented the Pittsburgh Courier, the New Orleans Louisiana Weekly, the Los Angeles Sentinel, the Ohio Sentinel, the Philadelphia Tribune, Johnson Publications (Ebony Magazine  and Jet Magazine), the Cleveland Call Post, True Magazine, and the New York Amsterdam News.

The Joe Louis Commission was given official governmental recognition in Cuba but in the United States the white press viewed this effort as solely another commercial venture by the former boxing champion desperately seeking to satisfy pressing financial obligations.  As American-Cuban diplomatic relations rapidly deteriorated in 1960, Louis’s activities in the island were chastised as supportive of a communist inspired regime. The mindset of Cold War policy makers and their anticommunism supporters viewed indigenous challenges to American international supremacy as Communist orchestrated.  Ironically, while Louis was attacked, white owned corporations continued to do business with the new revolutionary government.

The Joe Louis Commission, interracial but predominately black, traveled to Havana at the Cuban government’s expense.  They were wined and dined by Castro and his lieutenants while spending the last week of December 1959 and the first week of January 1960 viewing the island’s tourist facilities and attractions.  Throughout this period, Louis and his advisers negotiated a series of contracts totaling $282,000 to promote African American tourism to Cuba in the black print media.  This was an unprecedented sum for a non-corporate sponsor in the African American market.  Louis’s firm would receive a 15 percent commission and he was expected to publicly praise Cuba as a vacation site without racial discrimination.

The African American journalists who participated in the Joe Louis Commission brought their in-depth knowledge of the emerging U.S. civil rights movement, their displeasure with America’s inability to erase the stigma of second-class citizenship, and their growing frustration with the raging anti-black violence that characterized race relations throughout the South. Before the close of the official festivities, Thomas J. Davis, a journalist for the Cleveland Post, announced to the Cuban press, “In my opinion…the Cuban people are shaping their democracy.  Black people in the United States are used to the voice of the press that qualifies as communist any movement demanding justice for all the people, no matter its creed, color or economic position.  To us that is…false propaganda, tending to abort any democratic procedure.”  This statement and similar sentiments denouncing American racism and the use of communist hysteria as a tool to obstruct racial equality were quickly conveyed to State Department officials and anticommunist advocates within the mainstream American media. Nonetheless, African American participants in these historic meetings left Cuba energized and ready to encourage members of the national black community who could afford international travel to visit Cuba.

Joe Louis and his third wife, Attorney Martha Jefferson, returned to the states in early January 1960 to a chilly reception. He immediately registered with the Justice Department as a paid agent promoting Cuban tourism and then issued a statement declaring that “Cuba was the only vacation spot where Negroes could go without bias….”  Walter Winchell picked up this quote and published in his nationally distributed column.  This statement and pronouncements by black journalists associated with the Joe Louis Commission in Cuba were perceived as undermining America’s claim to represent the “free world” in its propaganda battle with the Soviet Union.  The hostility to the Cuban revolution among conservatives and “Cold War” liberals made it clear that domestic anticommunism entailed an unquestioning acceptance of U.S. foreign policy.

As the spring travel season of 1960 approached, the former boxing champion faced an assault by the mainstream white press, pressure from the Internal Revenue Service, and aggressive criticism by right-wing politicians.  Publications such as Time magazine quoted Castro’s advice in the form of a question to southern blacks facing Klan violence.   “What would happen,” Castro asked, “if Negroes in the Southern U.S., so often lynched, were each given a rifle?” Time argued that Castro’s “solution to end discrimination would be for Negroes to rise in arms against…Washington…taking a cue…” from the Cuban revolt.  Louis responded to such remarks by stating, “We have nothing to do with Castro or politics; it’s just another publicity account.”  Louis did not realize that the Central Intelligence Agency (CIA) and other covert agencies were working to destroy this legitimate business relationship that he and his colleagues had established with the Cuban government.

By early June 1960, Louis was forced to terminate his contract with the Cuban government.  The former boxing champion declared that “Never in my career as a public figure …has anything grieved me more than the conclusion many people have drawn from my association with Cuba.” Louis believed he had been accused of selling out his country by working for the Cuban tourist bureau. “Anything we ever did in connection with this account was with the [blessing of the] American Embassy in Havana.” The entire experience, according to Louis, had “depressed and confused” him.

Following the deterioration of the island’s economy after the collapse of the Soviet Union in 1991, the tourist sector became an invaluable resource.  The Cuban government opened or reopened resorts to lure Canadian and European tourists.  In response to the influx of foreign tourists, the Cuban leadership now promoted the nation as a Latin or white society.  This situation marginalized Afro-Cubans who have found it extremely difficult to gain employment in the tourist industry. Ironically, most middle-class African American tourists in the 1990s would never select Cuba as vacation designation because of the continuing America boycott of the island and the perception of Cuba as an anti-American country.  Yet Castro’s first attempt to promote tourism, structured on direct contact with middle-class African Americans and mainstream black leadership, failed because the CIA, Cold War politicians, and the white corporate world were determined to destroy this connection between the Cuban government and black America.