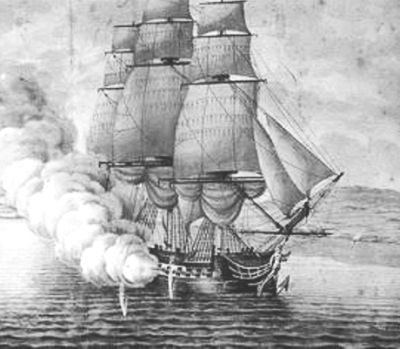 Captain John Perkins, nicknamed Jack Punch, was the first black commissioned officer in the Royal Navy. His date of birth and origins are unknown but Perkins first appeared in Navy records in 1775 when he joined as a ship’s pilot aboard HMS Antelope, the flagship of the Jamaica station. In 1778 he was put in command of the Punch schooner and in 1778 and 1779 it captured 315 enemy vessels under his leadership. He then commanded the schooner Endeavour and was promoted to commander by Admiral Sir George Rodney, the commander in chief at Jamaica. The promotion was disallowed and in 1783 at the end of the American War of Independence Perkins left the Navy and remained in reserve as a half-pay lieutenant, a practice that was common at the time. What he did between 1783 and 1790 is unknown.

In 1790 Perkins volunteered for naval duty once more and under Admiral Philip Affleck he undertook several clandestine missions to Havana, Cuba, and to the French-controlled Saint Domingue (modern day Haiti). In 1793 he was captured at Jeremie in Cap-Francois and was condemned to death for spying and for supplying weapons to rebel slaves. Captains Thomas Russell and William Nowell heard of his imprisonment and rescued him.

By 1795 Perkins was in command of the Marie Antoinette schooner and in 1797 Admiral Sir Peter Parker finally promoted him commander of the 14-gun brig HMS Drake. The promotion was confirmed by the admiralty and he was further promoted to post-captain (an antiquated term for a full captain in the Royal Navy) and put in command of the frigate HMS Meleager. In 1801 he transferred to HMS Arab where he caused an international incident by attacking two Danish ships. Later that year he captured the islands of Saint Eustatius and Saba in the Caribbean with Colonel Richard Blunt and a detachment of the 3rd Royal East Kent Regiment.

In 1804 John Perkins was in command of the 32-gun HMS Tartar when he attacked and fought the 74-gun Duquesne and two other 16-gun vessels comprising a French naval squadron that was more than three times larger than his own. He kept the warships engaged long enough for help to arrive at which point the French surrendered.

In March 1804, following his final mission to newly independent Haiti, Perkins resigned his commission. He died at his home in Jamaica on January 27, 1812 of asthma. There are no records that he had a wife or children. His obituary said that Perkins “annoyed the enemy more than any other officer, by his repeated feats of gallantry, and the immense number of prizes he took.”