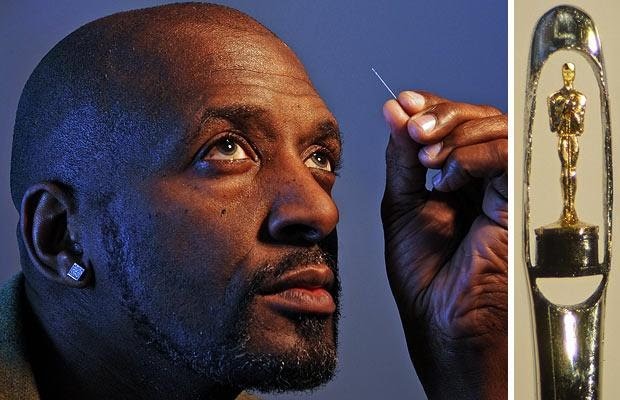 Afro-British micro artist Willard Wigan’s journey to international recognition and financial security began with an unhappy childhood. Born in Wednesfield, England, in June 1957 to Jamaican immigrants, he was afflicted with undiagnosed Asperger’s disorder. Uninformed, impatient teachers reacted to his dyslexia and struggle to read and write by humiliating him in front of classmates who also mocked him. At age five he retreated into his own world, a shed behind a garden where he enjoyed observing the activity of ants. He amazed fellow students with his miniature sculptures–made from wood splinters and tooth picks carved with a razor blade–and charged them for viewing. Some of the sculptures were representations of his teachers. “They made me feel small,” he later recounted, “so I wanted to make them look small in my child’s mind.” Upon discovering her son’s obsession with miniaturization, instead of redirecting him, Zeta Wigan encouraged him in the hope that someday his creations would result in a career as a professional artist.

As Wigan aged, he learned to better communicate with people. During nearly two decades working in a Birmingham factory he continued perfecting his craft, routinely sculpting and painting deep into the night on projects that required him to concentrate on controlling his breathing and heartbeat and labor in complete silence least he destroy the tiny piece he was crafting. He once inhaled and consequently destroyed a project it took months to construct. Finally, in his studio in a shopping center storefront in Birmingham, England, he sculpted a miniature bust of William Shakespeare that was noticed by an art buyer who offered a substantial payment for it. A news reporter’s follow-up on the purchase brought more attention to his work.

Using a powerful microscope and his own specialized tools that include head hairs, diamond and white gold fragments, and a paintbrush made from the antennas of an aphid fly, Wigan has set his creations on the head of a pin, atop an eyelash hair, on a grain of sand, in the eyes of needles, on a fish hook and, in one unusual case, inside a $1.5 million watch. In 2013 he cemented his claim to be the person who fashioned the world’s smallest ever sculpture when he hollowed out a dot of his beard stubble and inserted a golden motorcycle that measured just 3 microns which was smaller than a human blood cell. A number of celebrities have bought his painted sculptures that portray popular culture themes and personages from literature, sports, politics, and entertainment. In 2007 Lloyds of London insured a 70-piece collection of his micro-sculptures for nearly $13 million.

Wigan has confessed to not enjoying the arduous effort it takes to produce his sculptures but feels relieved and delighted to see people appreciating what he has accomplished, particularly young people who are autistic or suffer from low self-esteem. His success led to appearances on British and American television shows. Wigan holds two Guinness World Records; is the recipient of an MBE (Most Excellent Order of the British Empire); and has an honorary doctorate from the University of Warwick for his contributions to the visual arts.