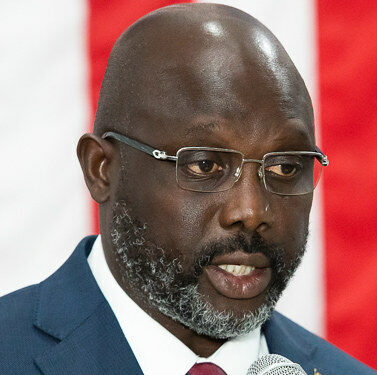 George Manneh Oppong Ousman Weah, the newly elected president of Liberia, was born in the slums of Monrovia, Liberia on October 1, 1966. During his professional sports career, he was considered one of the best soccer players on the African continent. For much of his youth, Weah was raised by his grandmother, Emma Klonjlaleh Brown, who provided for him while allowing him to pursue his dreams of becoming a professional soccer player.

After retiring from professional soccer in 2003, Weah returned to Liberia and became involved in politics. In 2005, at the age of 39, he ran for president of Liberia but lost to Ellen Johnson-Sirleaf. Despite the defeat, Weah continued to promote humanitarian projects in Liberia. He also continued his involvement with soccer. Although their effort was unsuccessful, he helped fund the Liberian National soccer team in their attempt to reach their first World Cup in South Africa in 2010.

When Weah ran for president in 2017, he won, defeating Joseph Boakai, the Liberian vice president. Weah won 61.5 percent of the votes compared to Boakai’s 38.5 percent. Much of Weah’s support came from Liberian youth. In addition, President Ellen Johnson Sirleaf’s did not endorse Boakai. In his inaugural address on January 22, 2018, Weah promised to fight corruption, pay civil servants, and show the private sector that Liberia is open for business.