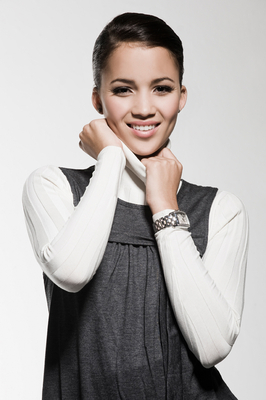 Whitney Toyloy won the title of Miss Switzerland in 2009 at the age of 17, the youngest of 16 candidates. The young beauty queen won a car worth over 38,000 Swiss Francs (about $38,649 in US dollars) and the right to represent Switzerland in the Miss Universe 2009 pageant. She made it to the top ten in Miss Universe, and placed 9th out of 83 contestants in the international pageant held in Nassau, Bahamas.

Born on July 21, 1990 in the city Yverdon, in the Vaud canton of Switzerland, the former beauty queen is 5’10”. Toyloy was the first woman with African ancestry to win the Miss Swiss title. Unlike pageant winners of African ancestry from other nations, such as Ariana Miyamoto of Japan and Denny Mendez of Italy, there was not much controversy about Toyloy’s victory.

Her father Dwayne Toyloy is of mixed race African American ancestry and her mother, Veronique, is Caucasian-Swiss. Toyloy has two younger sisters, Mathilde and Ava. In late 2014, all three sisters were signed to Zurich’s Time Model Agency, and they subsequently appeared together in a photo spread for Magazine Novembre.

This former Miss Switzerland has always put her studies first, and does not plan on making modeling her career. In July 2015, she graduated with a bachelor’s degree from the Lausanne Hotel School in Lausanne, Switzerland. Toyloy has a passion for watches and watchmaking, and hopes to take that passion and parlay it into a marketing career with a major watch company.

The young model suffers from iron deficiency, which can result in extreme fatigue and irritability. Toyloy recalls having difficulty with concentration in school, and sometimes even fell asleep during classes. After being diagnosed, the former Miss Swiss began taking iron supplements. This simple treatment vastly improved her quality of life, and inspired her to become a spokesperson for check-ton-fer.ch (check your iron), an organization for iron deficiency awareness.

Upon reflection, Ms. Toyloy feels as if she was too young to carry the weight of being Miss Swiss. The Miss Swiss title caused her to fall a year behind in school, and the pressure of being in the spotlight was difficult for the young pageant winner. Despite the challenges it brought, she reflects on her time as Miss Swiss fondly and considers it a positive chapter in her life.