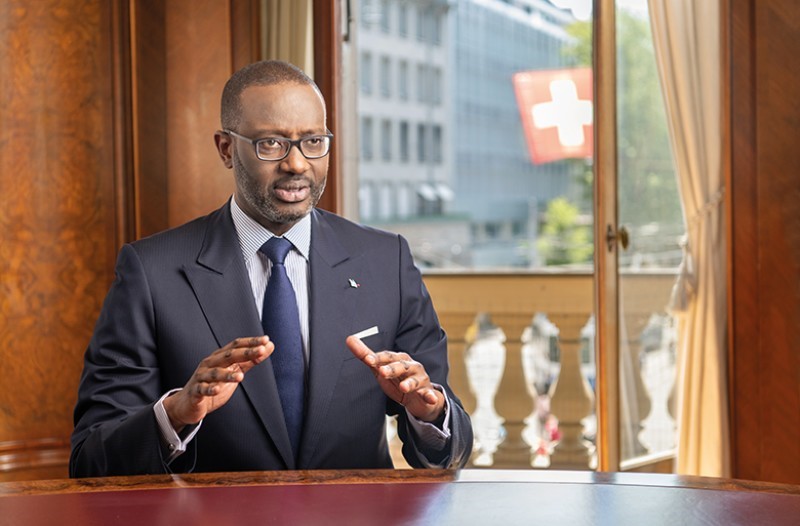 African investment banker Tidjane Thiam who was co-CEO of Credit Suisse from 2015 to 2020, was born one of seven children into a politically prominent family in Abidjan, Ivory Coast (Côte d’Ivoire) on July 29, 1962. His father, Amadou Anna Thiam, was a journalist and former cabinet member in the government of President Félix Houphouët-Boigny, and his mother, Marietou Sow, was the president’s niece. Thiam was the first in his nation to pass the examination to enter the prestigious Polytechnic University (École Polytechnique) in Paris, France, later graduating as valedictorian at the National School of Mines Paris (École Nationale Supérieure des Mines de Paris, or Mines ParisTech). A scholarship assisted him in earning a master’s degree in business administration at the European Institute of Business Administration (Institut Européen d’Administration des Affaires, or INSEAD) in 1988.

Thiam then moved to Washington, D.C., to gain practical work experience in the Young Professionals Program sponsored by the World Bank and then rejoined McKinsey & Co. in Paris where he had previously worked. From 1994 to 1999 he served in the cabinet of two Ivorian presidents as an economic and infrastructure adviser where he successfully pushed for privatization of public utilities and airports. After being detained during a government coup in early 2000, Thiam left home again to be a partner at McKinsey & Co. He next worked at the British insurance company Aviva from 2002 to 2007 where he rose to Chief Executive Officer (CEO). He next became CEO of another multinational British insurer, Prudential plc, thus becoming the first African to have the distinction of heading a FTSE 100 (Financial Times Stock Exchange 100) company.

Thiam resigned from Prudential plc in 2015 to take the helm of Credit Suisse, one of the largest investment banks in the world, based in Zürich, Switzerland. He instituted a “radical three-year plan” to reorganize the firm which led to his being named Banker of the Year in 2018 by Euromoney magazine. A corporate spy scandal in which Thiam was implicated led him to tender his resignation from Credit Suisse on February 7, 2020.

While working in corporate banking, Thiam on February 10, 2012, launched New York-based Freedom Acquisition I, a special purpose acquisition company (SPAC) after raising $250 million in an IPO. Thiam became executive chairman and former Credit Suisse colleague Adam Gishen became CEO. Trading on their strong name recognition, they raised an additional $50 million for the IPO of their SPAC.

Away from the boardroom, Thiam was chairman of the High Level Infrastructure Investment Panel established at the 2010 G20 Summit in Seoul, South Korea. He has advocated for sustainable development as a member of the African Progress Panel and was elected to the International Olympic Committee in 2019. Fluent in three languages and a chevalier of the French Legion of Honor, he is a dual citizen of Ivory Coast and France. He was married to Annette Anthony Thiam and they had two sons but in 2015 the couple divorced.