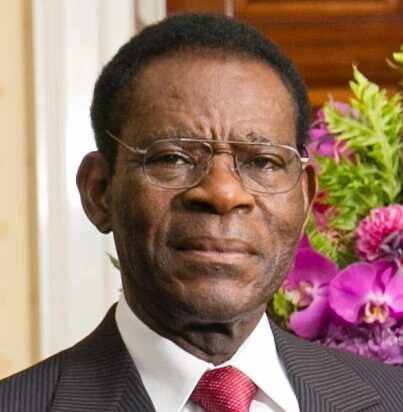 Teodoro Obiang Nguema Mbasogo is a former military officer who has served as the 2nd President of Equatorial Guinea since August 1979. He is the second-longest consecutively serving non-royal national leader in the world, after Paul Biya of Cameroon. Obiang was born in the town of Acoacán, in the Mongomo district, in former Spanish Guinea, on June 5, 1942. His family is of the Esangui clan, and his name is derived from the Fang people naming customs. His father, Santiago Nguema Eneme Obama, and his mother, María Mbasogo Ngui, chose his surname. Both of his parents originate from Gabon. After the death of Mbasogo, Obiang and his nine brothers were raised by their father and his new wife, Carmen Mikue Mbira. Obiang attended Cardenal Cisneros School Group in Ebebiyin, Equatorial Guinea in his youth, and obtained a degree in labor administration from the La Salle Center in Bata (now Enrique Nvo Okenve National College).

Obiang joined the Colonial Guard and attended the General Military Academy, located in Zaragoza, Spain, where he achieved the rank of Lieutenant. He worked as a leader of the National Guard, Governor of the province of Bioko, and head of the notorious Black Beach Prison. The first President of Equatorial Guinea Francisco, Macías Nguema, was Obiang’s uncle. After Macías ordered the murders of several family members, Obiang overthrew his uncle, in a bloody coup d’état in August 1979. Macias was placed on trial, sentenced to death, and executed by firing squad.

As the only candidate allowed to run for the Presidency, Obiang was elected initially to serve a seven-year term. He was re-elected in 1989, 1996, 2002, and 2009. He held the position of the 9th Chairperson of the African Union from 2011 to 2012. As President, Obiang holds all governing power in the nation and presides over an authoritarian regime. Under his authority, Equatorial Guinea has become a major oil supplier to the United States, and due to collecting several hundred million dollars in revenues annually from US oil companies, the country has one of the highest per capita incomes in Africa. Obiang, however, has been accused of unlawful killings by his security forces, government-sanctioned kidnappings, systematic torture of prisoners, and many other cases of abuse. To this date, however, no opposition has stepped forward to attempt to overthrow the President.

When questioned in a 2012 CNN interview with Christiane Amanpour whether he would step down at the end of his current term (2009-2016), he categorically refused. Forbes magazine has listed Obiang as one of the wealthiest heads of state in Africa, with a net worth of close to $700 million US dollars. Obiang is currently married to Constancia Mangue, and he reportedly favors his son, Teodoro Nguema, to succeed him as President.