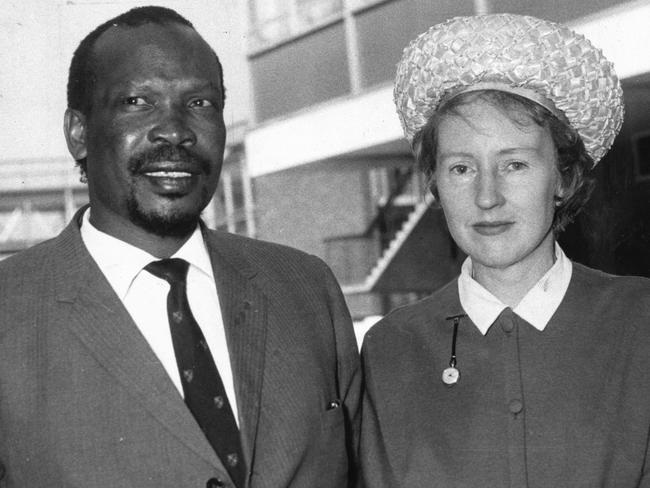 The Republic of Botswana’s first president was Seretse Khama. He was born on July 1, 1921, at Serowe in the British Protectorate of Bechuanaland. His grandfather was paramount chief (kgosi) Kigama III. In 1923 his son, Seretse’s father became Kgosi Sekgoma II. Upon Sekgoma’s death in 1925, Seretse Khama, at age of 4, became Kgosi. His uncle, Tshekedi acted as regent.
Young Seretse was sent to South Africa to attend Tiger Kloof Educational Institute, a boarding school. He later attended the University of Fort Hare in South Africa, graduating in 1944 with a Bachelor’s degree. He then went to England and studied law at Balliol College, Oxford, and Inner Temple in London.

In 1947, Khama met Ruth Williams, a clerk at Cuthbert Heath a firm of Lloyd’s of London. They soon began dating and were married in September 1948. He and Ruth, who was white, visited Bechuanaland where his uncle expressed his dislike of the marriage. However, Seretse and Ruth won over the elders at a meeting and Seretse was declared Kgosi, and his wife was made welcome. He and Ruth then returned to London.

The administrative headquarters of Bechuanaland was located in South Africa, a country that had formulated and embraced the racist theory of apartheid. As part of the legal structure of apartheid, mixed-race marriages were illegal in South Africa. The idea of a neighboring country having a prominent Black politician married to a white woman was anathema to racist South Africa. Since Great Britain did not want to jeopardize its relationship with South Africa, an important trading partner, in 1950 Britain banished Seretse Khama from returning to his homeland, succumbing to South African pressure.

In 1956, Britain and Khama came to an accommodation. He and his wife would be allowed to return and he would renounce his claim as a traditional ruler. He and Ruth returned to Bechuanaland where Khama was hailed as a nationalist hero.

In 1962, Khama founded the Bechuanaland Democratic Party. Three years later, in 1965, the British government recognized Gaborone within the borders of Bechuanaland, as the new capital. Khama was elected Prime Minister of the transitional colonial administration and on September 30, 1966, the Republic of Botswana (formerly Bechuanaland) became independent with Seretse Khama as President. He was re-elected twice and died in office.

During Khama’s years in office, Botswana had a rapidly growing economy based on exporting diamonds and beef. Within sixteen years Botswana transformed itself from one of the poorest to one of the richest nations in Africa. Universal free education was enacted. Khama also played an important diplomatic role in negotiating the transition to majority rule in Rhodesia (Zimbabwe).

Seretse Khama died of pancreatic cancer on July 13, 1980, at the age of 59. He and Ruth had four children: Jacquline Khama, Ian Khama (who became Botswana’s fourth President in 2008), Tshekedi Khama II, and Anthony Khama.