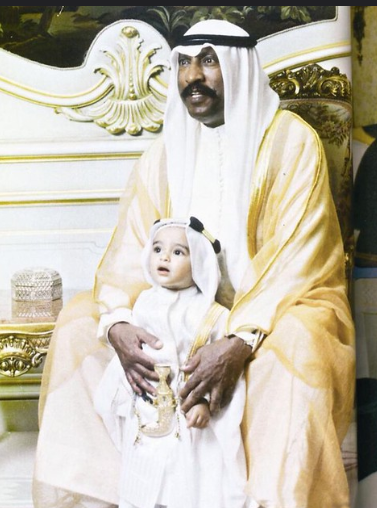 Saad Al-Salim Al-Sabah with his Son

For nine days in early 2006, Saad Al-Salim Al-Sabah headed the government of Kuwait. He was born in 1930, the son of a Ethiopian slave named Jameela (or Jamila) who was one of the five wives of his father, Sheikh Abdullah Al-Salim Al-Sabah, the 11th ruler of Kuwait and its first emir. Saad attended Al-Mubarakiya School in Kuwait City, the nation’s capital, and completed his studies at the Hendon Police College in Hendon, England, the training school for London’s Metropolitan Police Service.

At age 24 Saad was made deputy chief of police of Kuwait City. A member of the Supreme Council between 1954 and 1962, he was deputy director of the Police and Public Security Department (1959-1961). With the end of British protectorate status in 1961, he was appointed president of the Police and Public Security Department (1961-1962) and served simultaneously as Minister of the Interior and Minister of Defense (1962-1978). He held office for two terms as prime minister and president of the Council of Ministers (1978-2003). Other offices he presided over were the Supreme Defense Council, Supreme Petroleum Council, Civil Service Commission, and the Higher Council of Housing.

In 1978, members of the royal family elevated Saad to Crown Prince, i.e., the person to accede as ruler of Kuwait who extended the reign of the Al-Sabah dynasty. Saad was instrumental in resisting Iraqi aggression before and during the first Gulf War when Saddam Hussein’s Iraqi army invaded Kuwait in 1990. In the closing years of that decade, he suffered debilitating illnesses. Internal hemorrhaging in 1997 forced him to return to the United Kingdom for treatment. Additional health problems confined him to a wheelchair and he was eventually diagnosed with colon cancer.

Saad’s persistent health issues affected the course of Kuwaiti politics and governance. With the death of Kuwait’s head of state, Emir Jaber Al-Ahmad Al-Jaber Al-Sabah, on January 15, 2006, Saad as crown prince was next in line to rule and ascended to the throne. Doubts about his health persuaded enough members of the Kuwaiti parliament that he could not fully perform his duties as emir and they voted to depose him on January 24, moments before Saad, who after conferred with the royal family, submitted his official letter of abdication.

Married in 1948 to Sheikha Latifa Fahad Al-Sabah, the couple had five daughters and a son. Saad died of a heart attack on May 13, 2008, in Shaab Palace in Kuwait City. He was buried in the city’s immense Al Sulaibikhat Cemetery.